Shonda Rhimes on Why Her Work With Dove Doesn't Feel Commercial

Shonda Rhimes gets her first commercial production credit with today's debut of a video for Dove.

Of course, she's got plenty of other credits as writer and producer of such hits as "Grey's Anatomy," "Scandal," and more. And she says in an interview with Ad Age that her collaboration with Unilever on Real Beauty Productions doesn't really feel like commercial production, though it's quite different from her day job.

It's not actually Rhimes' first foray into advertising: She says her first job was at a San Francisco ad agency (she doesn't remember which). She also tells why she's working with Dove but isn't on a mission to improve women's portrayal in popular culture, even if many people see her doing just that.

Why did you decide to work with Dove?
I'm not an endorser of lots of things. This felt like a natural fit for me, not like I was doing a job or anything. The idea that they stand for celebrating women in all their forms and empowering women and redefining beauty felt in tune, not just with how I live my life, but how I do my work. It felt good.

How different is this from your day job?
It's completely different. For example, the first person we worked with, Cathleen Meredith, she's a real person. There's no fiction involved, which I'd have to say is refreshing and a lot of fun in a weird way, because you're just figuring out a way for someone to enhance their story and be themselves vs. creating stories. The beauty of "Real Beauty" is that you're not creating someone, you're highlighting them. And I got to meet these incredible people while doing it.

Why did you choose Cathleen?
She's pretty amazing. She started this group of women called Fat Girls Dance. And she said we're going to put out a new dance every week and put it up online and only do one take. And it's all going to be about the dance. And they were doing a high-level music video with hardcore choreography that I certainly couldn't do. Watching her not only made me want to get up off my sofa and dance, and make everybody else I know get off their sofas and dance, but it also was inspiring to see her spirit and clear knowledge that she was incredibly special and knew she was beautiful shine through those videos. [She] started fat girls dancing throughout the world. I think there's a group in Poland now. So it became like a movement.

How many submissions have you gotten, and what's your role? Do you have help sorting through them?
There are hundreds, or I think may be thousands now. So definitely a lot of help. I may see a final 10 or 20 and get to watch those and figure it out from there. We've all talked very clearly about what we think the criteria are. I don't know what I'm looking for. I just look for people who feel particularly special in how they think their beauty shines through and how they think beauty should be defined. And I want to be surprised by who those people are. I don't want to have some preconceived notion.

Do you make the final call, or is it a collaboration with Dove?
It's a collaboration. We have these great conversations on everything from what we want the storytelling to look like to who we're picking and how we want the finished product to look. It's been a great experience for me in a way I haven't had before. It's a very different process.

Does it feel like commercial production?
What's interesting is that it doesn't feel like commercial production. My first job when getting out of college was working as a receptionist and then as a little junior project manager at an advertising agency in San Francisco. And this feels nothing like that, in the sense that Dove doesn't look at me to sell a product. And it certainly doesn't need to be like those products where first they need to make you feel bad and then tell you how they're going to fix you. They're just about celebrating these women. It doesn't feel like we're making a commercial so much as we're telling the story of Cathleen. This feels very personal and very much like a documentary.

What was the ad agency in San Francisco?
You know, people ask me this all the time, and I cannot remember. I should go back and look it up at some point. It was a little tiny job, and I really liked it. But I got into film school, and I left.

Did you ever think about coming back to the ad industry before this?
No. This just felt like a really special chance to do something interesting and to voice this narrative about women. I have a 14-year-old daughter, and I want her to grow up realizing that every kind of beauty is valid and every definition is right, as long as it's defined by the person herself.

The Association of National Advertisers has a #SeeHer initiative to improve the representation of women in advertising and entertainment. Your work is often held up by them as a positive example. Do you personally see this as part of your mission?
It didn't start out for me that I want to improve the portrayal of women and girls. I was just writing women as I know them to be. We're women. This is how women are. And the idea that it was revolutionary to portray women as real women is shocking to me. So, to me, it's not a mission. It's the only way I know how to portray women. 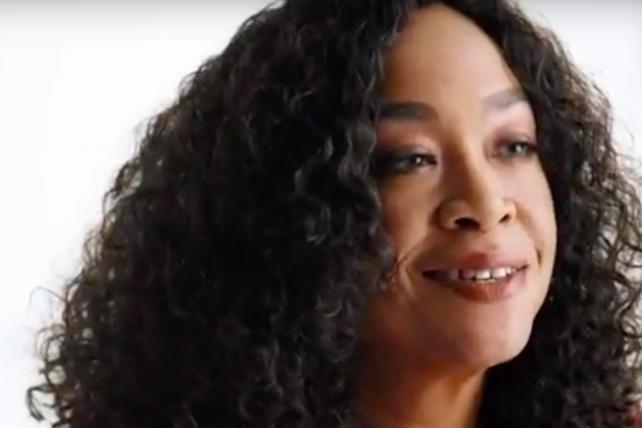 Shonda Rhimes gets her first commercial production credit with today's debut of a video for Dove.
Credit:
Unilever/YouTube