How the Dutch Brewery is Revamping a Historic Singapore Brand, Tiger Beer, To Make It 'More Boldly Asian'

Pick up a bottle of Singapore's iconic Tiger beer, and you'll now notice a subtle change in the logo. The "g" in the name looks like an "8," a lucky number in much of Asia.

That's part of a new strategy from Heineken International, which took control of the Tiger brand two years ago, to emphasize the brand's Asian identity. Along with revamped packaging, there's a new Droga5 international campaign focusing on real stories about cool young Asians – including a tattoo artist and a stuntman -- who defied family or societal expectations to choose their own path. Tiger's new slogan is "Uncage."

"This is the right time to be more boldly Asian," said Mie-Leng Wong,  Tiger brand director. "We see incredible creativity and talent coming out of the region, and this is the right moment to say, let's embrace our roots."

It's also a good time to plot Tiger's global expansion, Ms. Wong said: "The fact that we're an Asian brand also resonates very strongly with Western consumers -- they consider Asia to be the new cool."

Tiger has cachet and history dating back to 1932. Before Anthony Burgess wrote "A Clockwork Orange," he borrowed the brand's longtime slogan for a novel set in Southeast Asia, "Time for a Tiger."

Tiger is currently in 65 countries but is concentrated in Asia, where sales by volume were up 30 % in 2013 over 2012. The brand is starting its international push in Asia, but it sees an opportunity to grow elsewhere, especially in markets including London and Dubai. (In the U.S., it's still a niche product in Asian bars and restaurants, and the company is discussing its future role there.) 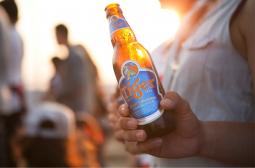 The number 8 and tattoos

Historically, the "g" in the Tiger logo used to look more like an 8, and the brand is bringing that back in a subtle restyling of the logo and packaging. In Chinese cultures, 8 is lucky because it sounds similar to the word for "wealth." (Numerology is not to be underestimated: Recall that the Beijing Olympics started on 8/8/'08 at 8:08 p.m.)

Meanwhile, the Tiger "uncage" campaign launched in Singapore Wednesday before its roll-out in 24 other markets with film, print and integrated digital engagement programs.

Droga5 Sydney's campaign features social videos of young Asians who broke out of their "cages" to live the lives they really want. One of the real people featured is a female tattoo artist in Hong Kong who overcame attacks about her chosen profession (tattoos are taboo in Chinese culture.)

Though consumers here don't strongly identify as "Asian" – national identity trumps any sense of continental belonging – young consumers do share a burden of heavy pressures and expectations from family, society and themselves, said Ms. Wong.

The cage is "a powerful symbol in its ubiquity among young Asians," she said.

Digital agency Iris worked on the campaign, and Glassick Brands revamped the packaging.

Droga5 said it sought to avoid beer commercial clichés as it took on the theme of "uncage."

"From my point of view we wanted to avoid doing something cheesy with tigers," David "Nobby" Nobay, the creative chairman of Droga5 Sydney, said. "We actually thought the cage was more interesting than tigers."