Artists Can Stay at the 'Brooklyn Patch' in Exchange For Content
READ THIS NEXT
Free Budweisers for the vaccinated, and ‘Vax Tee’ from Miller Lite: Trending 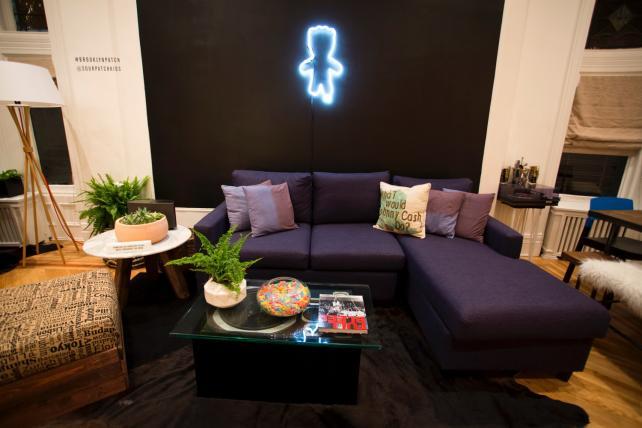 The living room of the Brooklyn Patch
Credit:

Bands and touring musicians looking for sweet relief from their touring schedules may soon start dreaming about Sour Patch Kids.

A couple weeks ago, the Mondelez-owned candy brand opened up a house in Brooklyn where touring bands can recover from the rigors of the road. It's called the Brooklyn Patch, and according to Mondelez marketing director Farrah Bezner, the Patch represents a long-term investment in indie music culture.

"We wanted to be able to contribute," Ms. Bezner said, pointing out that the Patch is meant to start long-term relationships with indie music artists and their fans.

"You have to break culture to make culture," she added.

When one gets down to brass tacks, the overall goal is to drive awareness and regard for the Sour Patch Kids brand among a specific demographic.

The four-bedroom, two-and-a-half-bathroom house is in a historic landmark building on a quiet street in the Clinton Hill section of Brooklyn; Ms. Bezner asked that the address be kept private.

This is not Sour Patch Kids' first foray into music-related marketing. Back in 2011, campaign starring the rapper and actor Method Man and led by agency Mother, had a national run. Though Mother remains Sour Patch Kids' agency of record, it has nothing to do with the Patch.

The NUE Agency is serving as lead agency, while the Participation Agency handled its design and experiential elements.

"We want people to feel at home," Ms. Bezner said.

Quid Pro Quo
Nevertheless, there is a quid pro quo associated with staying at the Patch. Artists who stay at the house are expected to create some content that Sour Patch Kids can share across a number of digital channels, which include a Brooklyn Patch-branded Tumblr as well as the brand's Facebook, Twitter and Instagram accounts. Ms. Bezner said it is also exploring the possibility of adding further amplification partners.

How much content depends on the duration of an artist's stay. "We have kind of a sliding scale," Ms. Bezner said.

An artist who stays in the house for a day or so will only be obligated to create a small number of social-media posts. In the event that an artist stays longer, the output is expected to be more substantial, though the type of content is up to the artist. It doesn't necessarily even need to be musical.

"This is not about us creating a Sour Patch Kids record," she said. 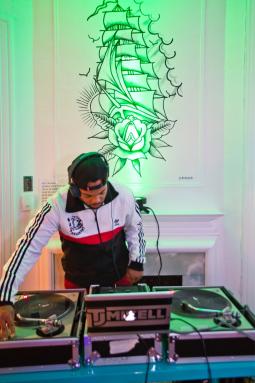 TJ Mizell was among the first artists to stay at the Patch.

Most bands on the road will only be staying for a day or so. But in the event that a band or artist stays for a longer period of time, camera crews and engineers will be made available to help them fulfill their content requirements. For example, the indie band Deer Tick will be spending a week at the Patch between Christmas and New Years Eve while it completes a weeklong residency at Brooklyn Bowl. The band will create a number of videos with the help of cameramen that the NUE Agency will bring in.

A wide range of artists will be laying their heads at the Patch, which is already booked up through the end of the year. They include Tame Impala, a sprawling psych-rock band from Australia, and Magic Man, a clean-cut synth-rock quintet from Providence, R.I. (UPDATE: Tame Impala's manager said the band was never scheduled to stay at the Brooklyn Patch. Employees at the NUE Agency incorrectly stated the band would be staying there in early November.)

Through these first few weeks, NUE Agency founder Jesse Kirshbaum says it's mostly housing artists it considers friends and family. "The word's not really out about this place yet," Mr. Kirshbaum said.

Yet when it is, they will have to begin curating, with the sole mandate being that NUE chooses artists who are making their way to stardom. "We envision this being a very grassroots thing," Mr. Kirshbaum said.

Though Ms. Bezner said she will be involved in which artists get to stay, NUE will be given a wide berth.

"We're a tastemaking agency," said Alex Kirshbaum, Jesse Kirshbaum's brother and a partner at NUE Agency. "They trust us."

It's not all gut instinct, however. "We give them some numbers too," Jesse Kirshbaum added.

If there are hard KPIs or metrics behind the campaign, Ms. Bezner is keeping them close to the vest. She said the brand has no intention of breaking any ROI from the Patch out from the rest of the brand's recent marketing initiatives, which include a Snapchat campaign and a scripted YouTube series called "Breaking Out," which stars a number of rising YouTube content creators including Ricky Dillon and Andrea Russet.

"As long as we're part of the conversation," she said.

Even though it's too early to tell if the Patch will bear any fruit, Ms. Bezner and her agency partners have already started planting additional seeds. An Austin Patch should be ready in time for SXSW in 2015.

"We see this as something that has a lot of legs," she said.