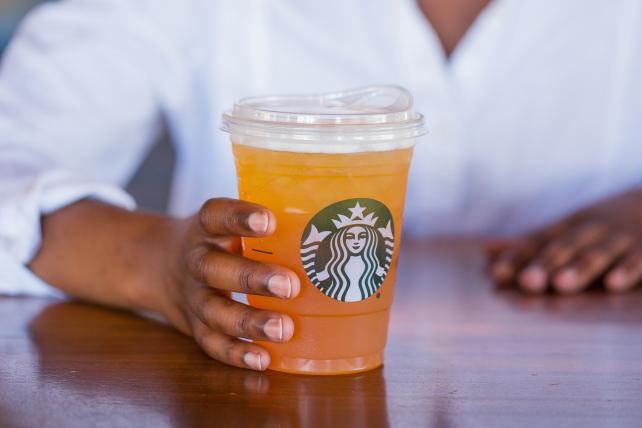 Starbucks says it will serve drinks with lids that resemble sippy-cup openings instead of with plastic straws.
Credit: Starbucks

Starbucks has decided to do away with plastic straws by 2020 over evidence that they damage the environment, the company said Monday. Its straws will be replaced by sippy cup-like lids that are also plastic, but more recyclable. Compostable paper or plastic straws will be available upon request, and with the chain's blended Frappuccinos. The company estimates the switch will eliminate the use of around 1 billion plastic straws per year.

The move comes as part of a larger trend against single-use plastics, particularly in the food service industry. The city of Seattle—where Starbucks is based—is believed to be the first major U.S. city to ban plastic straws, in a regulation that took effect July 1. Alaska Airlines said in May that it's phasing out the use of plastic stirrers and straws in its drinks after receiving a call to action from an environmentally-concerned Girl Scout. And University of Portland students in April mounted a successful campaign to get plastic straws banned from campus.

Across the pond, U.K. Prime Minister Theresa May announced a plan in April to prohibit the sale of plastic straws and drink stirrers, along with plastic-stemmed cotton buds. McDonald's locations across England and Ireland will already be compliant should her proposal become law, as it says it will be replacing plastic straws with a paper alternative in their 1,300 of its stores by September.

The single-use plastic problem gained attention in January, when Martha Stewart and Martha Stewart Living jointly announced their #ChangeTheDay campaign, which focuses on one environmentally friendly initiative each month. Its first initiative was ending the use of plastic straws.

The National Park Service estimates that Americans alone use around 500 million straws per day. Many of those straws end up in landfills, where they can sit for centuries without decomposing, or in the ocean, where they're often ingested by animals. That is harmful to the animals, of course, but also to humans who wind up ingesting traces of plastic themselves as it works its way up the food chain.

Alternatives to plastic straws have also been on the rise—think straws made of paper, bamboo, glass and metal. Each has its pros and cons—paper tends to get soggy, metal can get too hot or too cold, glass can break—but newer, more innovative versions are rolling out in an attempt to meet rising demand.