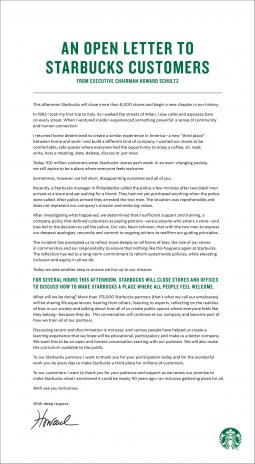 Starbucks, as you might have heard, is closing thousands of shops Tuesday afternoon for several hours of race, bias and inclusion training. The coffee chain is doing something else on Tuesday, too: A catch-all full-page ad in both The New York Times and the Philadelphia Inquirer, created internally, explaining why it's temporarily closing and its corporate philosophy, and thanking its partners and customers.

For several hours this afternoon, we will close stores and offices to discuss how to make Starbucks a place where all people feel welcome.

Thank you for your patience and support as we renew our promise to make Starbucks an inclusive gathering place for all.

The reason for the shutdown was an incident on April 12 when a Starbucks manager in Philadelphia called the police because two black men, Rashon Nelson and Donte Robinson, were sitting at a table and had yet to order. (They were waiting for a friend.) They were arrested and the incident went viral. Starbucks soon announced that it planned to shut down for an afternoon to train more than 175,000 "partners" (the company's lingo for employees). Some have summed up the idea behind the Tuesday session as, basically, a crash course in how not to be racist.

Last week, Starbucks laid out some of its training plans in a statement and nearly five-minute video. The materials being used in Tuesday's training will be shared with others outside the company, Starbucks says.

The newspaper ad features a letter from Executive Chairman Howard Schultz, who retells a story people familiar with the company's history have heard before: In 1983 a trip to Italy helped him understand the coffee culture and community in other countries, and he wanted to bring that love of hanging out and drinking coffee back to the U.S. As Schultz and other Starbucks executives like to say, the chain is meant to serve as a "third place."

He then retells the story about the arrest of the two men.

"The situation was reprehensible and does not represent our company's mission and enduring values," Schultz writes.

He notes that CEO Kevin Johnson met with the men who were arrested, among the numerous steps the company has taken. Still, one year into his tenure as CEO, it's not Johnson's voice being blasted in the paper, it's that of Schultz, who in many ways remains the face of Starbucks. After all, he helped grow the coffee company into a powerhouse that is the nation's second-largest restaurant chain by revenue.

Starbucks being Starbucks, the fact that it's temporarily shutting down more than 8,000 shops, as well as its corporate offices, was trending on social media Tuesday.

Still, the company isn't handing all of the Tuesday afternoon coffee rush (is that even a thing?) over to its competitors. About 7,000 licensed U.S. Starbucks shops, like those in airports and grocery stores, are expected to remain open this afternoon. Meanwhile, the company has been stepping up its afternoon marketing push in general as it tries to pull in more patrons in what can be sleepier hours for restaurants.

Social media and word-of-mouth chatter were getting more positive last week after plenty of negative buzz, according to Engagement Labs. The volume of conversations were also declining, "indicating that the initial buzz from the incident is quieting down," Engagement Labs says.