READ THIS NEXT
Interest in EVs has surged, but cost and other concerns undercut wider investment
A barista pours frothed milk into a drink inside a Starbucks Corp. coffee shop in New York, U.S., on Monday, Jan. 18, 2016.
Credit: Victor J. Blue/Bloomberg

Starbucks, feeling the heat after the arrests of two black men in one of its shops last week, plans to hold racial-bias education at all of its company-owned U.S. stores next month.

The company is closing its stores on the afternoon of Tuesday May 29 to conduct the training at more than 8,000 Starbucks locations.

The education session, "geared toward preventing discrimination in our stores," will be given to nearly 175,000 employees and become part of the company's process for new employees, it says. Starbucks also says it plans to make its materials available to other companies for their own use.

Two men were arrested April 12 after a worker at a Philadelphia Starbucks shop called police when the men were waiting in the store but had not made any purchases. While Starbucks declined to press charges, the damage to the company's reputation had already begun to heat up.

A patron at the store shot video of the men wearing handcuffs and being escorted out by police officers, which was shared widely on social media.

@Starbucks The police were called because these men hadn't ordered anything. They were waiting for a friend to show up, who did as they were taken out in handcuffs for doing nothing. All the other white ppl are wondering why it's never happened to us when we do the same thing. pic.twitter.com/0U4Pzs55Ci

A push to boycott Starbucks and multiple protests soon followed.

Starbucks executives including CEO Kevin Johnson have been in Philadelphia to speak with the two men and figure out the company's next steps.

"I've spent the last few days in Philadelphia with my leadership team listening to the community, learning what we did wrong and the steps we need to take to fix it," Johnson said in a statement Tuesday. "While this is not limited to Starbucks, we're committed to being a part of the solution. Closing our stores for racial bias training is just one step in a journey that requires dedication from every level of our company and partnerships in our local communities."

Starbucks has put out numerous statements on the matter. Just before announcing the May 29 training, it issued a separate statement Tuesday saying Johnson and the men who were arrested "have engaged in constructive discussions" and that Johnson apologized on behalf of Starbucks. That statement was issued as coming from Starbucks and attorney Stewart Cohen of Cohen, Placitella & Roth.

Seattle-based Starbucks says all of its company-owned retail stores and its corporate offices will be closed the afternoon of May 29 for "a training program designed to address implicit bias, promote conscious inclusion, prevent discrimination and ensure everyone inside a Starbucks store feels safe and welcome." Starbucks said it would develop the curriculum for the training with guidance from experts including Bryan Stevenson, founder and executive director of the Equal Justice Initiative; Sherrilyn Ifill, president and director-counsel of the NAACP Legal Defense and Education Fund; Heather McGhee, president of Demos; former U.S. Attorney General Eric Holder; and Jonathan Greenblatt, CEO of the Anti-Defamation League.

"The company's founding values are based on humanity and inclusion," said Executive Chairman Howard Schultz, who was also in Philadelphia to meet with community leaders and Starbucks employees, the company said. "We will learn from our mistakes and reaffirm our commitment to creating a safe and welcoming environment for every customer." 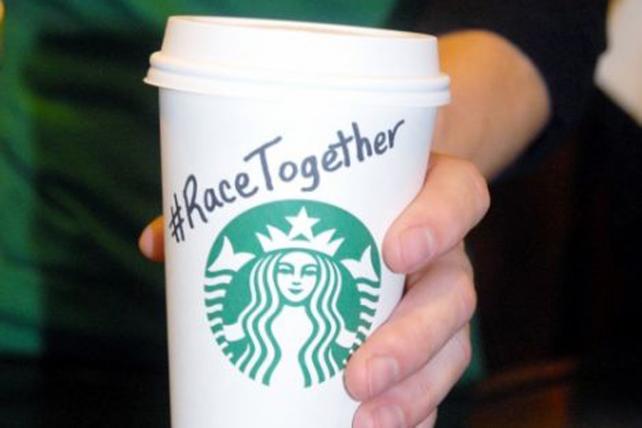 Back in 2015, when Schultz was still CEO, Starbucks had a short-lived "RaceTogether" campaign in which it tried to get people to discuss race relations. That push included writing #RaceTogether on cups and full-page ads in newspapers.

Starbucks isn't the first company to shut down for a major, publicly announced training plan. Chipotle shut its stores for several hours on Feb. 8, 2016, for food safety training. And it's not the first time Starbucks has shut down to educate staff. Back on Feb. 26, 2008, it shut down its U.S. shops for 3-1/2 hours of operations training when Schultz felt the brand needed to improve.