Where Do Millennials Love to Shop? Hint: It's Based in Bentonville, Ark. | Ad Age
Skip to main content

Where Do Millennials Love to Shop? Hint: It's Based in Bentonville, Ark.

Gen Y Likes Walmart Better Than Their Elders Do; Even Insiders Skeptical 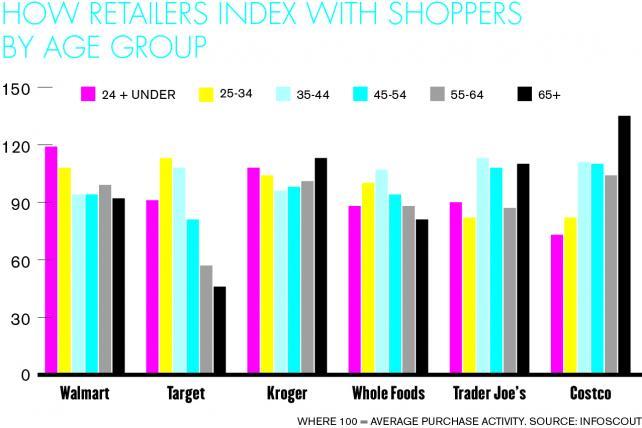 Walmart beats all retailers among people under 24, and all but Target among those 25-34, according to InfoScout.
Credit:

The reason may be its investment in e-commerce and mobile, or it could be that its low prices resonated during the economic downturn. Or it could be Tommee Tippee baby bottles (read on).

"Millennials now, as a generation, like Walmart the best, more so than Generation X, more so than boomers," said Matt Kistler, Walmart senior VP-consumer insights and analytics.

"That kind of shocks a lot of people, including inside the company," admitted Walmart Chief Marketing Officer Stephen Quinn.

It doesn't exactly jibe with the perception that big-box supercenters are losing ground to niche brands, small stores and e-commerce. Mr. Quinn sees it differently. "As millennials become time-crunched with relationships and kids coming along, it's opening up a strong need for them to have a one-stop shop," he said.

Walmart didn't share details of its data. But InfoScout, which has a nationwide panel of more than 175,000 shoppers, shows Walmart indexes higher with those under age 24 than Target, Costco, Kroger, Whole Foods or Trader Joe's. It's also rated higher than all those except Target with shoppers aged 25 to 34.

That's where Tommee Tippee, a British brand, comes in. "We saw our customers really searching for this online and were able to go out, meet the vendor and bring this online," Ms. Ramsey said. That led to bringing the product to stores.

Millennials were also the first generation to grow up in a time where Walmart was a dominant retailer. "It could be their Baby Boomer parents dragged them to Walmart so much it feels a bit like home," said Mr. Quinn.

Last, its price positioning resonates, Mr. Kistler said. "The millennial customer grew up with a lot of hardship. They see Walmart as a place where they can save money."