Lovers of chalupas and crunch wraps have spoken: Taco Bell is now bigger than Burger King.

Taco Bell's U.S. systemwide sales jumped 5 percent to about $9.8 billion in 2017. The company, owned by Yum Brands Inc., has made inroads with indulgent fare, along with $1 items that appeal to budget-strapped millennials. Last year marked the first time that Taco Bell has overtaken Burger King, the data showed.

Though Burger King has fared better than many in recent years—and is now the fifth-largest domestic restaurant brand—it hasn't kept pace with its biggest burger rivals, McDonald's and Wendy's, nor with chains like Taco Bell. Burger King's domestic sales rose just 1.5 percent in 2017, according to the Technomic report, which will be finalized in March. 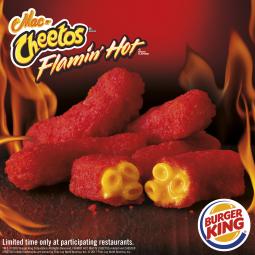 Still, Burger King's revenue is up, and it has won numerous ad accolades, including Cannes Lions' Marketer of the Year in 2017, for its often irreverent creative coming from agency David. It also introduced a series of limited-time items in recent years to appeal to fast-food fans, such as Chicken Fries and Mac N' Cheetos.

Taco Bell, meanwhile, has drawn customers with its own new foods, including fried-chicken taco shells. In January, it introduced $1 nacho fries, one of several $1 items it promotes in ads from Deutsch.

"They certainly continue to do pretty well, and bring out some interesting and new menu items," Henkes said. "They've done a good job of connecting with the millennials and Gen Z."

In 2016, the rivals spent roughly the same amount on U.S. measured media. Taco Bell spent $375.9 million, just ahead of Burger King at nearly $375 million, according to Ad Age Datacenter analysis of data from Kantar Media.