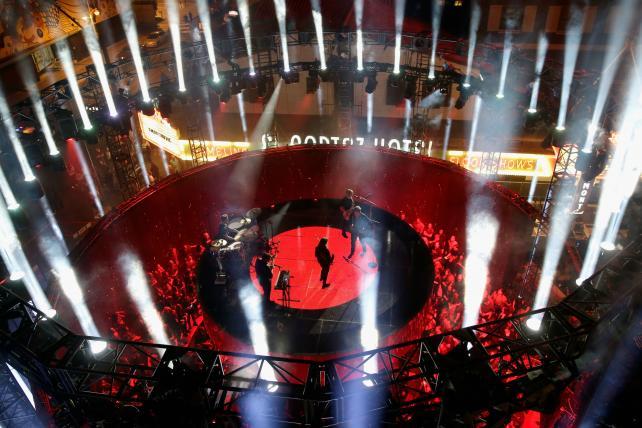 Target took a different approach to its Grammys advertising this year by pooling eight 30-second media buys to air a four-minute live Imagine Dragons performance during a commercial break.

"We had this idea that was very bold and very simple, too," said William White, VP-marketing at Target, which has sponsored the show for the past 15 years using traditional spots. "What do fans want when they're watching the music awards? More music performances."

The push carried the hashtag #moremusic and promoted the release of Target's exclusive deluxe edition of the band's upcoming album "Smoke & Mirrors." The goal, he said, is to put fans "closer to the artist in ways that they otherwise wouldn't be able to do."

The retailer's Grammy Award media buy varies each year, but has been around four minutes for the past few years, Mr. White said. Haworth Marketing & Media handled the buy.

The live performance was planned for downtown Las Vegas with 300 fans in attendance wearing LED wristbands and necklaces. To capture the concert, the company arranged for 20 ground cameras with aerial shots filmed via helicopter. The director is Grammy winner Jonas Åkerlund, who also worked with Target on its partnership with Coldplay last year.

Part of the strategy was to tease the performance on social media, such as Snapchat, ahead of the event with clues and a behind-the-scenes look at the production process. After the event, Target will use Twitter's "Flock to Unlock" feature to share behind-the-scenes video from Imagine Dragon's live performance.

The performance will also be featured in a 30-second spot slated to get heavy rotation the week of Feb. 17, when the album goes on sale.