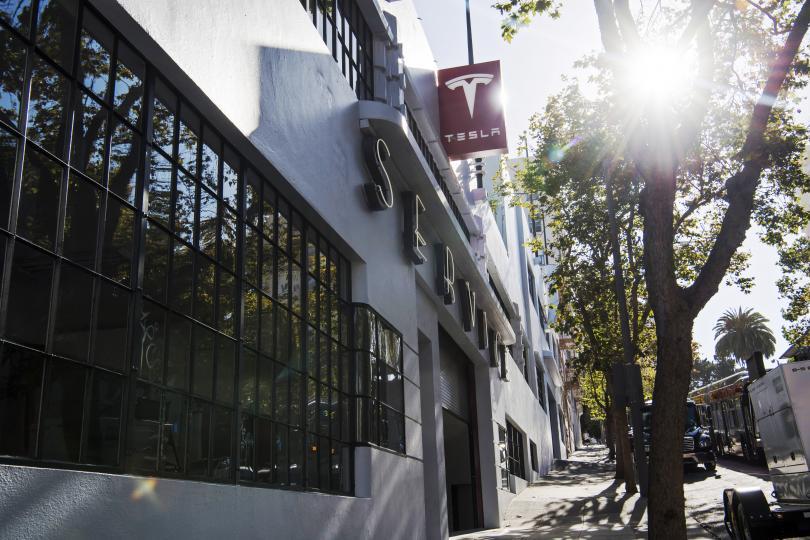 Though Tesla is based in nearby Palo Alto, the 65,000-square-foot San Francisco center is the company's first in the city, where one-fifth of residents don't own a car and ride-sharing services led by Uber Technologies Inc. are emerging as a dominant form of transportation. The location was originally home to a Chevrolet showroom built in 1937, the year the Golden Gate Bridge opened.

"Model 3 reservations skew young and urban," Jon McNeill, Tesla's president of global sales and service, said in an interview Tuesday before an evening event for nearly 400 attendees, including customers. "What makes this our flagship store is that the Bay Area is really our home."

Tesla is expanding retail operations as it targets production of 500,000 vehicles by 2018, roughly a 10-fold increase from last year. The automaker operates about 260 stores worldwide -- the largest is in Oslo, Norway -- and plans to have 300 open by the end of this year. Tesla aims to have about 440 open by the end of 2017, when the Model 3, starting at a more affordable $35,000 before incentives, is slated to begin deliveries.

In Tesla's second-quarter letter to shareholders last week, the company said it will accelerate store openings, adding a new location about every four days through the end of this year. "We are adding stores in new population-dense markets like Taipei, Seoul, and Mexico City, while also adding stores in our most mature markets like California," Tesla said in the letter. The company's best-performing stores are in the Golden State, Mr. McNeill said.

If Tesla's bid to acquire SolarCity Corp. is approved by shareholders of both companies later this year, company stores will become one-stop shops both for cars as well as rooftop solar panels, Powerwall home batteries and home chargers for vehicles.

"Van Ness Avenue was traditionally San Francisco's Auto Row, and it's in the heart of the city," Kazuko Morgan, vice chairman of real-estate brokerage Cushman & Wakefield, said in an interview. "When you drive up Highway 101 from Silicon Valley, it ends at Van Ness. So it's an ideal location for commuters."

Tesla currently makes the Model S sedan and the Model X sport utility vehicle. The company expects to deliver 50,000 cars in the second half of the year, reaching about 79,000 for 2016.