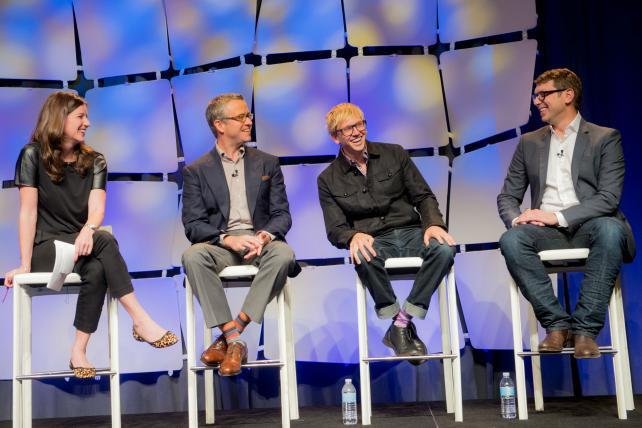 A panel about Target's Made to Matter partnership.
Credit:

Harness data to create content your audience wants.
Kraft Foods Group leans on its troves of first-party data to determine the kinds of content its consumers want to read and watch. Last St. Patrick's Day, for instance, the company noticed a sharp increase in searches for green velvet cupcakes. Kraft didn't have any recipes on hand, so it quickly developed one with four different Kraft ingredients and shared it through owned media channels. "Data, going forward, becomes the new currency," said Deanie Elsner, exec VP-CMO at Kraft Foods.

Target your messages to audience, not a specific medium.
Kraft Foods doesn't promote Oscar Mayer Bacon on ESPN, where there's a large male demographic. Instead, it uses a combination of social media, digital video and online storytelling to promote the product. Its campaigns are more targeted, and as a result, its media buys are more efficient. The approach is part of Kraft's agile marketing strategy, Ms. Elsner said.

Think twice before calling your agency a vendor. Nationwide CMO Matt Jauchius railed against using the term vendor in a speech about cutting waste in marketing operations. "I think the word 'vendor' creates an us vs. them," he said in an interview. "It creates a wall." To get the most out of your agency, think of them as colleagues. "With knowledge workers, how you relate with people and how you create a partnership matters in ways that are both tangible and intangible," he said.

A quick, transparent response is key in a PR crisis.
One of the most crucial aspects of a PR crisis is to respond quickly so your brand can help steer the conversation, said Diane Pelkey, VP-global communications and entertainment at Under Armour. This year the company faced a PR crisis during the Winter Olympics in Sochi when the U.S. speedskating team started losing races and the brand was the scapegoat. It's also important to reiterate hte company's mission and have top execs speak publicly, Ms. Pelkey said.

Lead rather than follow consumer trends.
Many consumers are moving quickly toward brands tied to health and wellness -- for those who aren't there yet, Target plans to nudge them along, said the retailer's exec VP-CMO Jeff Jones. The 'Made to Matter: Handpicked by Target' campaign for natural consumer goods includes 16 different brands and over 100 products. Target's partners, which include companies like Method and Plum Organics, are committed to promoting the broader industry, rather than just stealing market share from one another.

Data puts marketing in charge.
The harnessing of data by marketing is putting that function in the driver seat. "Over two thirds of the [sales] process for a customer happens before they even talk to the company," Cisco CMO Blair Christie said. And the information about how customers engage before reaching out to sales is owned by marketing. This makes marketing much more powerful within organizations, with other departments looking to the CMO for guidance on how to interact with their prospects and customers. The new dynamic, Ms. Christie said, can lead to benefits across the company: "Marketing and sales can be more complimentary than ever before."

Tap the social media mines for gold.
If a brand has the gift of abundant user-generated content, marketers should seize it with a concerted effort, said Paul Crandell, CMO of GoPro. Like most marketers, Mr. Crandell has a team that combs the web for videos to amplify. But he also employs a creative unit that finds content then packages it as the brand's own. "We're not just a camera any more," Mr. Crandell said. "We're an enjoyment-platform for people around the world."

Simple adjustments to a product's design can make it appealing in multiple markets.
Coca-Cola tapped a local Brazilian artist to help develop the design of its can and bottle for the 2014 World Cup in Brazil. But it didn't limit the design to just a local audience. Coke's design choices enabled it to incorporate subtle tweaks to make the cans and bottles customizable to different countries, according to James Sommerville, Coca-Cola's VP-global design. That helped Coke introduce its campaign in 175 of the 207 markets it serves.