It's David vs. Goliath as Toppers doubles down on using Domino's image despite cease-and-desist | Ad Age
Skip to main content

It's David vs. Goliath as Toppers doubles down on using Domino's image despite cease-and-desist

Toppers Pizza, a little-known U.S. chain, isn't backing down from a Domino's Pizza request to remove an image of a Domino's truck from a flyer. In fact, Toppers is doubling down, and says it's about to run more ads featuring the truck.

"We've got to make our creative work harder, let's face it. We're fighting these people that are running TV ads every eight minutes or something," says Scott Gittrich, who founded Toppers in 1991 after working in the Domino's system for almost eight years.

In June, a flyer for a new Toppers in Duluth, Minnesota, featured a Domino's truck delivering dough and a Toppers staffer carrying a bag of flour. "Not making dough in-house? What. The. Truck," the ad reads. The work is from Hiebing, Toppers' creative agency since 2013.

Domino's took the Duluth flyer quite seriously, delivering a cease-and-desist letter dated June 11 to the legal team at Toppers headquarters in Whitewater, Wisconsin. Toppers began to fight back, including Gittrich blogging about the topic in what he says is now his most-read post to date.

The ad was the next phase of a "them vs. us" campaign Toppers began earlier this year, touting its use of Wisconsin cheese and other elements that it believes sets it apart from then-unnamed industry behemoths. 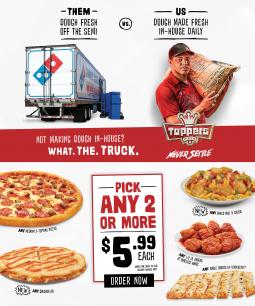 On July 2, Toppers plans to start running more ads, including direct mail, featuring the Domino's truck. This will be followed by more new ads in October.

There are plenty of ads in the same vein: Sprint has pitted itself against Verizon, and there were the once-popular TV spots that pitched Apple's Mac against a PC. And those are strong rivalries. Toppers remains a very small player in the pizza industry. It has 86 locations and projects total 2018 sales of around $63.5 million, up from the estimated $61.2 million in sales it had in 2017, according to Technomic. Domino's, with more than 5,500 U.S. locations, had 2017 systemwide sales of nearly $5.93 billion, according to Technomic. The average Domino's location brings in more than $1 million a year.

Some suggest the push is a bit of a vendetta since Gittrich used to work with Domino's. (He says he began as an hourly employee in 1984, was a general manager of several restaurants, an area supervisor and then director of operations for a 22-store franchise in Charlotte.)

"I actually really loved my time at Domino's Pizza and this is not personal to Domino's at all," he says. "This is more about the industry and how we're kind of fighting [what] fast-food pizza has become."

Domino's declined to comment. In the past, it has touted its system of producing fresh dough in centers and delivering it to stores. As it said in an annual filing in February, "We produced over 525 million pounds of dough during 2017." Domino's says it believes its dough manufacturing system and supply-chain process "enhances the quality and consistency of our products. ... [And it] allows store managers to better focus on store operations and customer service by relieving them of the responsibility of mixing dough in the stores."

Gittrich says Toppers spoke with its lawyers before running the ads that feature Domino's specifically. "I just wanted to make sure that we were playing by the rules," he says. "It's fun to use that cocky voice to say these brand-relevant things and kind of poke our competitors in the eye."

"He's using only as much as he needs to make his point and all of his statements are factually accurate," says Daliah Saper, a trademark attorney, principal and founder of Saper Law, who reviewed the flyer. "He's gotten way more publicity out of that letter then if he would just back off."

Toppers says it isn't spending more than usual on the campaign. But it is getting more buzz than usual and trying other new approaches, such as discussing Domino's pothole-filling effort as a way to point out that chain's delivery of dough.

Gittrich doesn't expect Domino's will take further action. "They know what we know, which is it's fair and true and legal," he says. "If something did occur we're prepared to continue to run it and do whatever it takes to continue. We're confident we're on solid ground."

~ ~ ~
CORRECTION: An earlier version of this article stated that the average Domino's location brings in more revenue than all of Toppers combined.