Here's some marketing that actually might deliver on its promise: A new line of pot-infused sparkling water includes a variety called "Joy." Find out more below, plus details on the newest unexpected meat Arby's is stuffing into its sandwiches. But first, some ominous news for marketers and agencies across the pond.

Business conditions in the U.K. are getting gloomier, forcing a pullback in marketing spending. The London-based marketing industry trade group Institute of Practitioners in Advertising reports that U.K. marketing budgets in the third quarter grew at their slowest rate since the fourth quarter of 2015. The results come from a survey of U.K. marketing professionals. It found 21 percent of respondents increased their marketing budgets in the quarter, while 18% revised downward. Negative factors include concerns about Brexit and the overall direction of the U.K. economy. 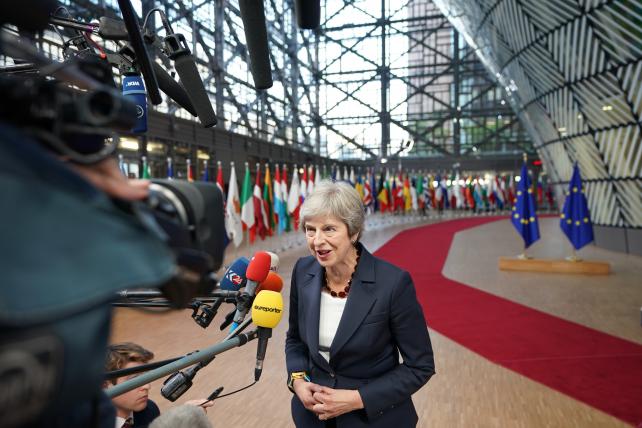 Theresa May, U.K. prime minister, speaks to reporters as she arrives ahead of a European Union (EU) leaders Brexit summit in Brussels, Belgium, on Wednesday, Oct. 17, 2018.
Credit:
Jasper Juinen/Bloomberg

The so-called Bellwether report projects ad spending growth of just 0.7 percent next year, before momentum picks up again from 2020 to 2022. "With ongoing Brexit uncertainty, it is perhaps no wonder that companies are having to be more cautious with their marketing spend and are inevitably increasingly downcast about their financial prospects," states Paul Bainsfair, director general of the trade group.

Spirit Halloween—best known for temporarily taking up empty storefronts in strip malls and charging high premiums to last-minute shoppers—beat all other retailers when it came to consumer clicks on Halloween-related product listing ads between Sept. 1 and Oct. 9, according to a recent report from Kantar Media.

Product listing ads typically appear at the very top of searches performed on Google and are accompanied by an image. The segment, also known as PLAs, is regarded as one of the largest revenue drivers for Google. According to a recent report by Merkle, PLAs produced 59 percent of all Google search ad clicks during the second quarter of this year. Spirit Halloween captured a 21.6 percent share on desktop search and 18 percent of all mobile clicks performed on Google during the Sept. 1-Oct. 9 period. Meanwhile, Kantar says the top keywords during the same time period were "Halloween decorations," "Halloween inflatables," "Halloween animatronics" and "Halloween lights."

Tmall, the marketplace for brands within Alibaba Group, China's Amazon rival, is expanding its retail innovation department, Tmall Innovation Centre. The group has forged a new partnership with 10 research and data tech firms, including Nielsen Co. and Euromonitor, and will provide them with consumer insights and data from its shoppers.

A century into its existence, Sunsweet Growers has a new agency. The Yuba City, California-based brand has appointed Barker as its agency-of-record. A 30-second spot touts prunes as "the feel good fruit," with song lyrics that include, "It feels good, to feel good." Indeed.

Celebrity chef Marcus Samuelsson is stumping for Panera. He appears in "Food Interrupted," a Panera-produced six-week digital video series about what's in what we eat. Chefs and others are featured in weekly videos on grains, plant-based diets, sugar, eggs, meat, and clean eating. Panera is also now disclosing the nutritional content of its whole grains breads, and says it's the first national chain to do so. Actor Rainn Wilson is also featured in the series, which concludes in mid-November.

A seared duck breast sandwich flies in (sorry) to 16 Arby's locations on Oct. 20. Duck isn't Arby's first foray into somewhat unexpected meats. The "we have the meats" chain last year served a venison sandwich nationwide and had an elk sandwich in select markets. Now, it has plucked a select group of restaurants near duck hunting spots, like Jonesboro, Arkansas and Chico, California, to serve an unspecified number of the sandwiches for a limited time during duck hunting season. The duck breast in the sandwich, sourced from Maple Leaf Farms, is seared and then cooked Sous Vide, and comes topped with crispy onions and a smoked cherry sauce on a toasted bun. A video promoting the sandwich swaps in a duck for the Arby's hat in the logo.

To be or not to be…a Nordy 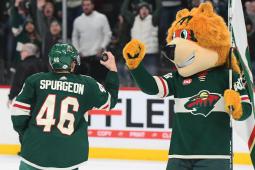 Popular department store Nordstrom is out with a new loyalty program for customers that it has dubbed the Nordy Club. The name, according to a spokeswoman, refers to the nickname customers and employees of the Seattle-based chain proudly call themselves. (Nordstrom shopper and Ad Age reporter Megan Graham confirmed this fact.) Of course, any Nordy members will need to avoid being confused with the mascot for the Minnesota Hockey Club, a cheerful wild tiger-type animal who is also named Nordy. Hey, at least it's not the Gritty Club.

It's hard to keep track of all the cannabis products flooding the market, but this one caught our eye: Eric Schnell, who created the sparkling tea brand Steaz, is behind "mood33," a new line of sparkling herbal beverages containing "tailored dosed ratios of THC and CBD." THC stands for tetrahydrocannabidinol, the ingredient in cannabis that makes you high. CBD is an extract derived from hemp plants that's quickly becoming a panacea for all manner of aches and pains. 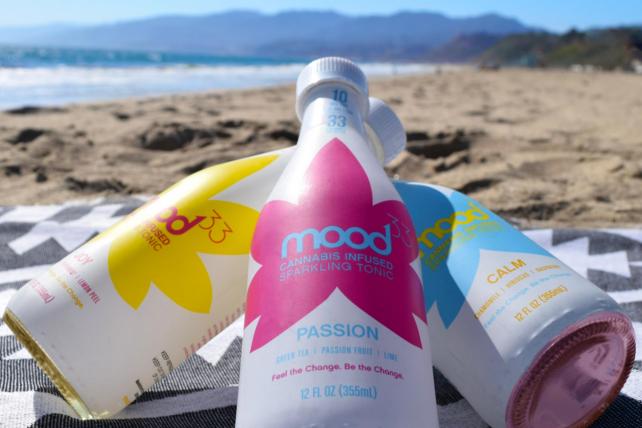 Mod33, which is launching in California, includes a variety called "Joy," which promotes "feelings of positivity and happiness." We bet it does. It follows the Golden State introduction earlier this year of "Hi-Fi Hops," an "IPA-inspired" sparkling water infused with THC from craft brewer Lagunitas.

$151 billion: The expected sales figure of online holiday retail sales this year, up 14 percent from last year, according to Forrester.

After 50 years on Sesame Street, Caroll Spinney is retiring. This is how he brought Big Bird to life.

Roughly one year after the departure of chief marketing officer Jonathan Mildenhall, Airbnb is boosting its marketing ranks. The fast-growing brand promoted Geoff Seeley to global marketing director and appointed Musa Tariq to head of marketing for experiences earlier this week. Seeley had been media director; Tariq was most recently chief brand officer at Ford. An Airbnb spokesman said the company did not have any updates on filling the CMO role.

Antonio Sciuto, who spent three years as CMO at Nestlé Waters before departing earlier this year, is now senior VP of go to market at Salesforce, a newly created position. The move makes sense for Sciuto because he ushered in a massive undertaking at Nestlé using Salesforce tech, which helped guide the company through a so-called digital transformation. The former McKinsey and Procter and Gamble exec will now serve as a strategic customer advisor in areas such as CPG, retail and manufacturing. Although Salesforce has long dominated the business-to-business world with its cloud software, the company is now aggressively moving to capture market share with business-to-consumer brands, an area that's long been dominated by Adobe.

Nestlé in July tapped Yumi Clevenger-Lee, who previously had been marketing director for the Latin American division of Cereal Partners Worldwide, as Sciuto's replacement.