READ THIS NEXT
This week’s marketing winners and losers

The UAW is planning to launch a "buy American" advertising campaign. 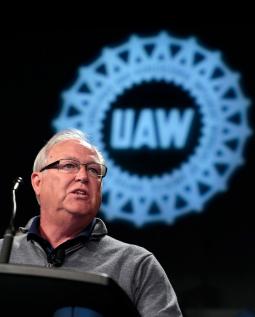 Automotive News reports that at a meeting with reporters on Thursday, UAW President Dennis Williams said he is "in discussions" to produce ads to encourage U.S. customers to buy union-made cars manufactured in America. The idea was inspired by a revived buy American sentiment that has been growing since the 2008 recession.

"I haven't seen it this way for many years," Mr. Williams said. "People now know the impact of an economy that is reckless in trade and policies and how it impacts their lives."

As more people express interest in buying American-made vehicles, he said it's important to educate consumers, especially since U.S. automakers operate plants outside the country. Earlier this month, the UAW criticized General Motors for a Buick ad featuring two vehicles assembled in South Korea and Poland.

Mr. Williams said he gave kudos to President Donald Trump for being the first president to point out the multitude of issues with the North American Free Trade Agreement, which has spurred automaker investments in Mexico. President Trump said he intends to renegotiate NAFTA and will pull out of the agreement altogether if negotiations fail.

Though he is concerned with the president's stance on immigration, health care and the environment, Mr. Williams said he plans on reaching out to the Trump administration to organize a meeting to provide the UAW's opinions on NAFTA negotiations.

Union membership was dissatisfied with the most recent presidential election, making it even more necessary for the UAW to work with the current administration, Mr. Williams said. Though nearly 60% of UAW members voted for Democratic candidate Hillary Clinton and 33% voted for Trump, an unprecedented 8% voted for neither candidate of a major party, according to an internal survey.

"I think even those who voted for Clinton or Trump had some discomfort with it," Mr. Williams said.

Katie Burke is a writer with Automotive News

Katie Burke
View all articles by this author