'We’ve listened. We’ve learned. We’re changing,' says the Mars Food brand in ads announcing the overhaul today
READ THIS NEXT
The Week Ahead: Roblox goes public and the Grammys are back

Uncle Ben’s is changing its name to Ben’s Original and dropping the image of a Black man from its packaging in an overhaul meant to distance the rice brand from racist stereotypes while maintaining a piece of its 74-year legacy.

The Mars Food brand also announced plans “to create more equitable iconography,” but did not release a new image along with the name “Ben’s Original,” which will begin appearing on packaging in 2021. Along with its name change and decision to remove the image of a Black man from its packaging, the food marketer announced community outreach programs including a partnership with the National Urban League.

“We understand the inequities that were associated with the name and face of the previous brand, and as we announced in June, we have committed to change,” Fiona Dawson, global president or Mars Food, Multisales and Global Customers, said in a statement.

The Uncle Ben’s brand, created by Mars in 1946, was named for a Black Texan farmer known as Uncle Ben “who grew rice so well, people compared” Mars’ Converted brand rice “to his standard of excellence,” the company previously explained in an online timeline. The man whose image came to personify the brand was Chicago chef and waiter Frank Brown.

Over the years, images used to promote the brand were interpreted as racist stereotypes of Black servants. After PepsiCo’s Aunt Jemima announced plans to retire its brand name and image in June, Uncle Ben’s was one of the food brands that quickly followed, announcing plans to evolve the brand, including its visual identity.

Now, Uncle Ben's is the first of that group of brands to publicly unveil a new moniker, along with efforts to strengthen ties to the Black community and others.

“Ben’s Original community outreach programs will ensure underserved communities have access to nutritious meals we all deserve, as well as help culinary entrepreneurs of all colors get educational opportunities so their ideas and voices can be appreciated by all,” Mars Food announced Wednesday.

Efforts in the U.S. include working with the National Urban League on a scholarship fund for aspiring Black chefs, as well as investing in the community of Greenville, Mississippi, where Uncle Ben’s products have been produced for more than 40 years.

“Brands have an important role to play as we continue to navigate this moment of reconciliation regarding racial justice, diversity and inclusion,” Marc Morial, president and CEO, National Urban League, said in a statement released by Mars Food.

Mars Food announced that it listened to thousands of its employees, consumers and other members of the global Black community to inform its decisions. “It’s only by listening that we have been able to learn and understand the steps we need to take towards a more equitable brand identity under Ben’s Original,” Rafael Narvaez, global chief marketing officer and R&D officer, Mars Food, said in a statement.

The company worked with research agencies as well as with BBDO, JKR, MediaCom and Weber Shandwick, on the process. The brand must now work on finalizing imagery and iconography to go along with the new brand name in an inclusive way. New packaging is set to debut in the first quarter of 2021.

On Wednesday, the brand plans to promote its overhaul in a print ad set to run in select newspapers, including in Greenville, Mississippi, as well as the Wall Street Journal, which opens with the lines: “We’ve listened. We’ve learned. We’re changing.” 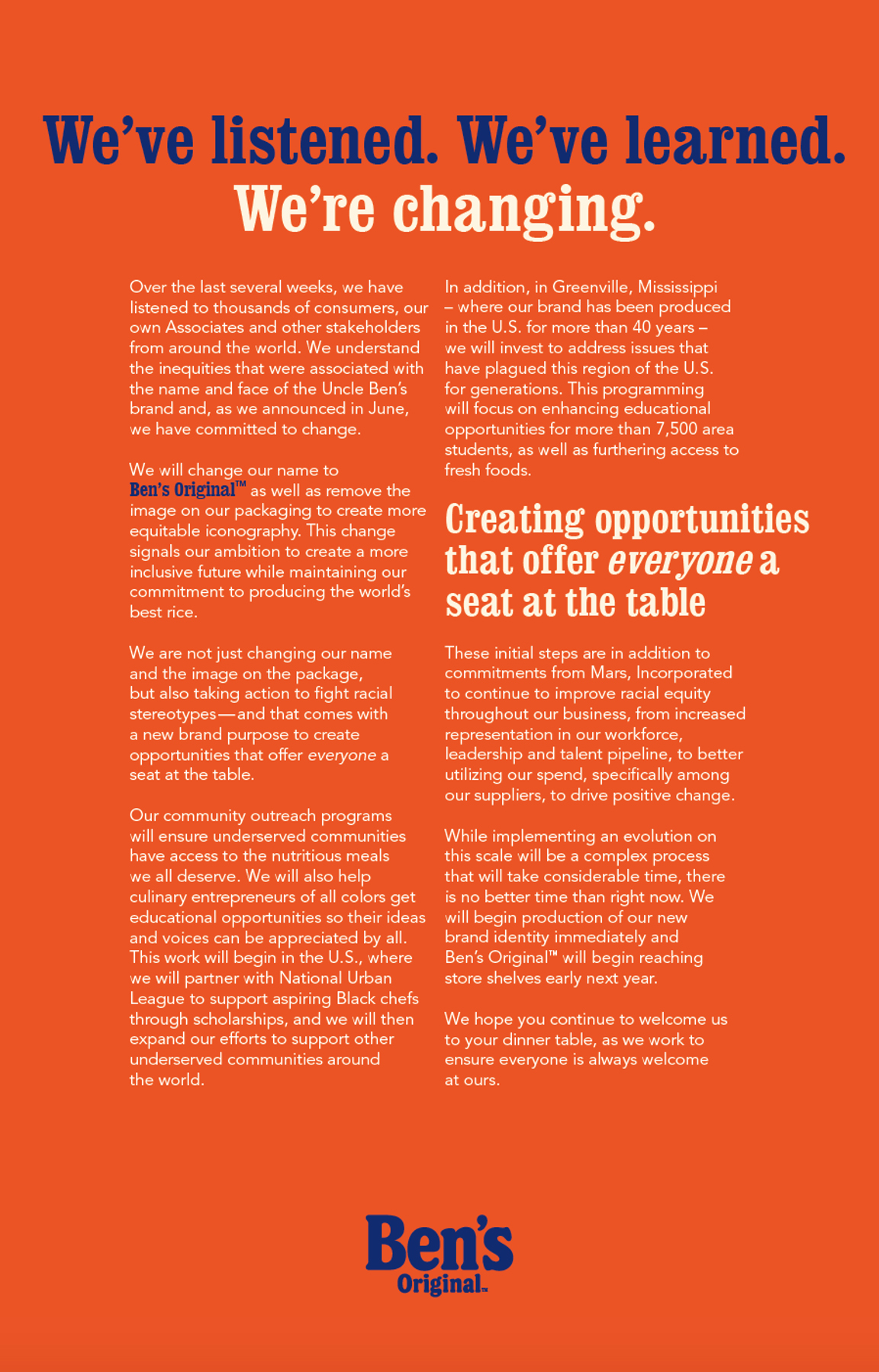