Universal's Jody Gerson Pumps Up the Volume for Ads 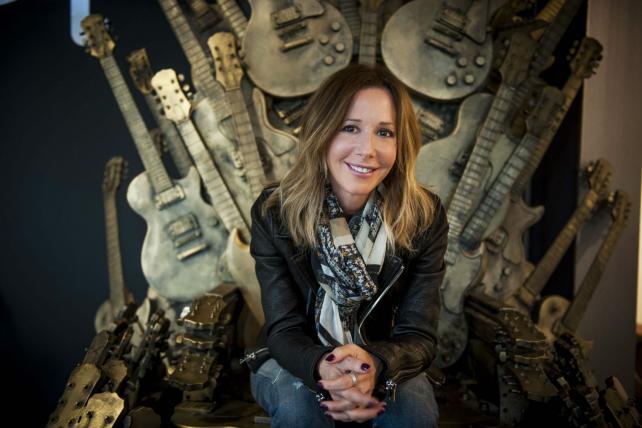 Jody Gerson is having a good year.

The CEO and chairman of Universal Music Publishing Group recently closed a deal for Bruce Springsteen's catalog and—years after discovering a 14-year-old Alicia Keys—believes she has found the next big thing.

You likely saw her handiwork at the Grammy's this year in an ad that matched up "Nothing Compares 2 U," sung by a variety of musicians in tribute to Prince, with the Google Pixel smartphone (executed by Droga5). Gerson, who has been with Universal Music for almost three years, sat down with Ad Age to discuss the intersection of marketing and music, the problems with streaming, her favorite app and more.

How did get into the music industry?
I grew up in Philadelphia where my dad had a nightclub. So I kind of grew up in the music business and had an affinity for music. Music was the thing I've always been comfortable in.

And now?
The trend of placing music to picture and to advertising does a few things: One, it gives the opportunity for emerging artists to have their songs heard, because radio playlists are so small. And it's an opportunity for legacy artists and legacy songs to be reintroduced to a new generation and it's an opportunity for brands to be associated with cool stuff and cool music. It's hard enough to get people to watch commercials and music is one of the things that helps draw people in.

Do you have a favorite commercial right now?
The Volkswagen commercial using the song "America" by [Simon & Garfunkel] was a classy way of promoting a brand using an incredible song.

What's your favorite streaming platform?
I like Pandora and Apple, but I find myself using Spotify more. Music is so much more accessible today. Musical.ly, obviously, is for younger kids, and I can't tell if it's waning or not. I have a 13-year-old daughter and when she was 11 she was all about musical.ly, and [then] when she was 12, it was over.

What keeps you up at night?
The horrible rates we're being paid by those streaming services. There's such a boom for record companies because they're able to negotiate their rates in a free market more than publishers are because of complicated consent agreements. Subscription and streaming are the present and the future and we have to get those deals right.

How do you do that?
We're working on it. It's a process. Some of it is government controlled, but we'll get it right. The other thing that keeps me up at night is that our industry has to create a database to make it easier for people to license music.

How do you deal with that?
For us, a great way to market music is through sync—the synchronization of music to picture. It's the one area in music publishing that you can negotiate and control the fees. It can financially be a big win for us.

So it's about introducing a new artist via a commercial.
Look at Marian Hill. The commercial they did for Apple's wireless AirPod headphones for iPhone 7 did such an incredible job of introducing the song "Down," and it was a fantastic commercial. You see the commercial and then you're in a SoulCycle class on a bike and you hear it. It used to be that the first way you were introduced to a song was on the radio, but that's not the first place you hear music any more. So, for us, finding the right brand to put a new song to and the right campaign to reintroduce a classic song to an audience is incredible.

How do you make sure you're protecting the integrity of the artist?
It's about artist relations. Any time a song is in a commercial, it's promoting that brand, so what's incredibly important for us is to not just jam a commercial down the throat of a songwriter or artist. You have to be careful about how much it's exposing the song.

Is the challenge the same for movies and TV shows?
It's a little different because you're not really promoting a brand. Where that comes into play is if a brand has sponsored the advertising of a movie and all of a sudden your song is in a trailer of a big Marvel movie and you have product placement and you're like, "Wait, what am I promoting here?" So you have to be careful. Television is an easy one-time use that's usually not as controversial, but there are artists that want to know which scene because you don't want a scene where the song is being made fun of either in a TV show or a film.

As a woman in a C-suite role in the music industry, do you feel alone at the top?
There are fewer women at the top of my industry and I think that's something that absolutely has to change. I think, like many other businesses today, there are incredible women who are in the company and running departments, but not enough running the company.

What are you doing to try to fix this?
I'm on the board of my daughter's all-girls' schools called the Archer School for Girls. I run a meritocracy, but I do feel like I have to be a voice for other women because I believe my experience is not dissimilar from other women's experiences and I'm very conscious of not only being a role model, but making it easier for other families and companies to have balanced lives.

Are ads still sexist?
Absolutely. Advertising has so many steps before a commercial is actually on the air, I'd imagine between the advertising companies, the creatives and the corporations they must be so sensitive to it. But I still look at billboards and think, "My poor daughter or son must think this is what women look like." And we still have the issue of airbrushing in magazines. So, how many kids growing up really know what a female adult's naked body looks like, for real?

How about in music?
It's way worse in music videos. I think music is often misogynistic. I'm always shocked that women allow themselves to be portrayed the way they are in music videos and even in live concerts. Why are women not wearing clothes? One might say it's empowering, but on the other hand, is it about being sexy or empowered? I think girls today are confused by those messages.

Any big wins this year?
A major highlight for us was recently we closed a deal with Bruce Springsteen to administer his catalog for the world. He'd been with several other companies and now he's represented by us.

What about up-and-coming artists?
I just signed an artist myself named Sza, who I think is going to be a game-changer. She's an empowering, wonderful woman and she's signed to the same label as Kendrick Lamar. She has a powerful voice and she's going to have a moment.

What are some emerging trends in music?
I see so many artists featuring another artist's songs. There's still a boom with dance. Also, Latin. Look at "Despacito." What happens with streaming is you can see those trends become even more obvious now.