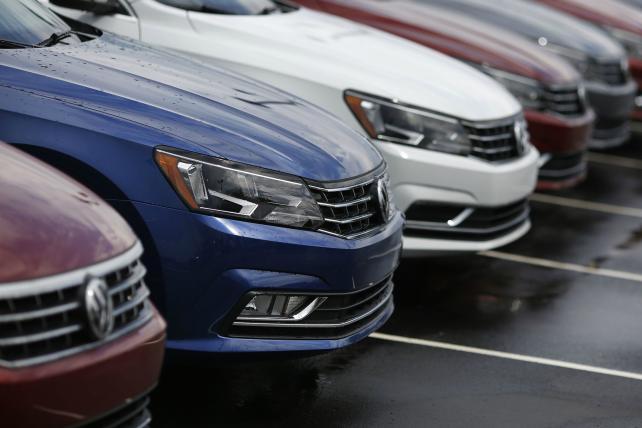 Volkswagen AG and drivers suing the company in the U.S. over its diesel-cheating scandal won final approval of their $14.7 billion settlement to resolve what's likely to be the largest portion of VW's civil liability worldwide.

The accord requires VW to buy back cars with 2.0-liter diesel engines armed with so-called defeat devices used to beat emissions tests. Under the deal VW reached in June with consumers and regulators including the U.S. Environmental Protection Agency and the Federal Trade Commission, car owners will be offered $5,100 to $10,000 each in compensation along with the option of a buyback or a fix.

The automaker has earmarked $19.5 billion (17.9 billion euros) to cover costs stemming from the scandal. With Tuesday's approval by U.S. District Judge Charles Breyer in San Francisco, VW has committed to almost $16.6 billion in settlements, including $1.2 billion for U.S. franchise dealers and $603 million to California and 43 other states over violations of consumer-protection laws.

Mr. Breyer set aside objections to the agreement, saying that few VW owners complained "and their substance does not call into doubt the settlement's fairness.'' He called the settlement fair, reasonable and adequate and said it achieved the primary goal of getting polluting cars off the road.

"There is no just reason for delay," Mr. Breyer said in the order, which allows the buybacks to begin immediately.

Volkswagen's payout for settlements is among the largest in corporate history, exceeded by the $246 billion agreement between the tobacco industry and U.S. states in 1998 and the $38 billion BP has spent so far over the 2010 oil spill in the Gulf of Mexico to resolve government probes as well as claims for private property and economic losses.

"VW got itself in a lot of trouble on both sides of the Atlantic, basically lying to a host of governmental regulators, its ultimate customers and its many dealers in between," said Anthony Sabino, a law professor at St. John's University in New York and an expert on complex litigation. "They're not getting off cheap, but they're stopping the bleeding."

The president of the German carmaker's U.S. unit called the settlement "an important milestone in our journey to making things right." VW is committed to carrying out the program as seamlessly as possible for customers, Hinrich J. Woebcken said in an e-mailed statement.

While VW has resolved much of its legal exposure in just over a year since the emissions cheating was revealed, the company still faces a potential trial with owners of 3.0-liter diesel cars in the U.S., shareholder claims, environmental lawsuits by multiple states and criminal investigations by the U.S. Justice Department and European authorities.

"Volkswagen remains focused on resolving other outstanding issues in the United States and continues to work towards an agreed resolution for customers with affected 3.0L TDI V6 diesel engines," Mr. Woebcken said.

The carmaker agreed in the U.S. settlement to devote as much as $10 billion to buy back affected models and compensate drivers. It will also pay $2.7 billion to federal and California regulators to fund pollution-reduction projects, and contribute $2 billion toward investment in clean technology.

The settlement with the U.S. government requires VW to get 85% of the cars recalled by June 30, 2019. If it fails to do that, it will have to pay $85 million more into the environmental mitigation trust for each percentage point of the shortfall. It will also have to pay an additional $13.5 million into the trust for each percentage point it falls below the 85% target in California.

For VW to meet its target, drivers will have to register online to participate by September 2018. The website -- greeting drivers with the banner "We're working to make things right" -- will prompt owners and lessees to select between their personalized buyback options and a fix. Drivers will then be asked to visit their local dealership where a designated VW representative will handle the sale or modification. The carmaker is still seeking government approval for a fix for the vehicles.

VW owners can continue to drive their vehicles for now, even if they wouldn't pass state emissions testing. Individual states may require approved emissions fixes on these vehicles in the future. Owners who choose the buyback option will receive their cars' trade-in value as of last September, just before VW admitted to the emissions cheating, plus the compensation payments.

About 3,300 owners have opted out of the class, including more than 20 plaintiffs who spoke against the deal at an Oct. 18 court hearing. Anna St. John, an attorney for the Center for Class Action Fairness, was one of the opponents.

The $10 billion earmarked for VW owners and lessees is a "bad deal for consumers,'' Ms. St. John said Tuesday in a statement. "The actual value to consumers will be far less than that and would have been available to consumers even without this class action settlement.''

Elizabeth Cabraser, lead attorney for the consumer plaintiffs, urged all class-members to participate in the deal.

The approval "holds Volkswagen accountable for its illegal behavior and breach of consumer trust,'' she said. "We encourage all class members to take advantage of the significant compensation this settlement provides, which also fixes or removes these polluting cars from our roads."

Ms. Cabraser said she's turning her attention to reaching a settlement for the owners of 80,000 3.0-liter cars. VW is still trying to devise an acceptable fix for those vehicles, which include the Volkswagen Touareg, Porsche Cayenne and Audi Q5.

VW supplier Robert Bosch Gmbh is also facing plaintiffs' claims that it played a crucial role in covering up the defeat-devices. The company has fought back against allegations in the U.S. calling the claims of its role "wild and unfounded." That case also remains in court before Judge Breyer.

With the final deal approved, VW may officially submit its modification proposals for 2-liter engines to the EPA, which until now was prohibited from officially endorsing any of VW's informal remedies. So far, the California Air Resources Board has been critical of the carmakers' attempted solutions. CARB has twice rejected VW's recall plans -- once in a January letter related to the 2-liter engines and again in a similar July statement for the 3-liter models.

The more drivers who opt to fix their vehicles, the lower VW's final bill. Without an approved modification, VW will likely be on the hook for the full $10 billion set aside for consumers.