Walmart bounces back with best sales in more than a decade 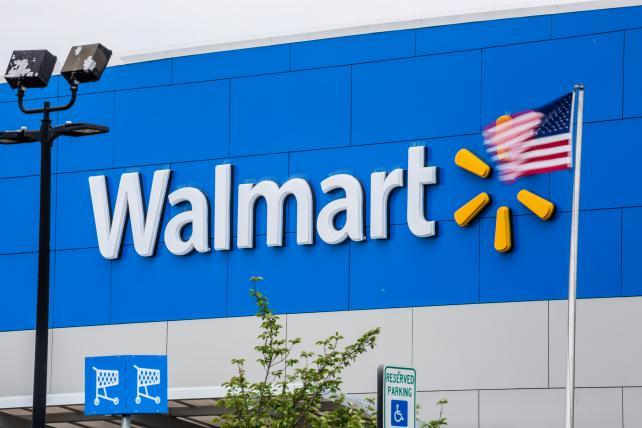 Walmart bounced back from a lackluster start to the year with the strongest sales gain in more than a decade fueled by its grocery business, brightening the outlook for the overall retail sector. The stock jumped as much as 11 percent, the most intraday since October 2008.

It was "a banner quarter on multiple fronts," Charlie O'Shea, an analyst at Moody's Investors Service, said in a note. "The food business continues as a bright spot."

Walmart has benefited from improved consumer sentiment and tax cuts that have put more money in Americans' pockets this year. U.S. retail sales rose by more than forecast in July, as shoppers snatched up apparel and school supplies. But investors are still somewhat skeptical that brick-and-mortar retailers can keep pace with online rivals like Amazon, evidenced by Macy's shares plunging Wednesday despite boosting its earnings and sales guidance.

"We're pleased with how customers are responding to the way we're leveraging stores and e-commerce to make shopping faster and more convenient," Walmart CEO Doug McMillon said in a statement. "We're continuing to aggressively roll out grocery pickup and delivery in the U.S., and we recently announced expanded omni-channel initiatives in China and Mexico."

Another bright spot in the second quarter was the Sam's Club warehouse chain, whose comparable-store sales increased 5 percent, more than double analysts' estimates, marking the strongest quarter in six years.

Walmart's shares rose to as high as $100.21 in Thursday trading, bringing the stock's gain this year to under 1 percent.

Biggs said the retailer benefited from improved weather in May, the first month of the quarter, which led to the biggest quarterly gain in customer traffic in more than six years. Some customers made fewer shopping trips during the cold, wet April.

"Customers tell us that they feel better about the current health of the U.S. economy as well as their personal finances," Biggs said. "With warmer weather, sales of seasonal items like pools, air conditioners, swimwear and gardening supplies really popped in May compared to April. No doubt we were aided by tailwinds during the second quarter."

For the full fiscal year, Walmart expects comparable sales, excluding fuel, of about 3 percent at both its namebrand stores and at Sam's Club. It had earlier been expecting growth off at least 2 percent at Walmart stores and slightly negative to flat performance at the bulk chain.

The retailer now expects full-year adjusted earnings per share of $4.90 to $5.05, excluding the sale of its majority stake in Walmart Brazil, losses related to its JD.com investment in China and tax adjustments. That's up from the $4.75 to $5.00 it had been expecting previously.

It had earlier said it would have to trim its full-year profit forecast to account for its acquisition of a majority stake in Indian e-commerce merchant Flipkart, which hasn't yet been incorporated into the forecast.

"If you are a Walmart bull, there are many reasons to be bullish today," Brian Yarbrough, an analyst at Edward Jones, said in an interview. "They did benefit from pent-up demand, but let's give 'em credit, it was a very solid quarter."

~ ~ ~
Next, Ad Age's biggest event of the year, has added new speakers including Dara Treseder, chief marketing officer at GE Ventures; Tony Magee, founder of Lagunitas; Pras Michél, the Fugees co-founder now creating Blacture; Meiling Tan, head of marketing at Waymo; Natalia Oberti Noguera, founder and CEO of Pipeline Angels, the network of women investors; and Jen Wong, the chief operating officer at Reddit. They join a Next lineup already stacked with CEOs, investors, founders, innovators and marketing leaders, coming together Nov. 13 and 14 in New York to describe the near future in everything from AI to food. Join us to look over the horizon.