Western Union is pushing money transfers to Cuba in a new series of TV spots produced on the island, which was recently opened to U.S. travel and business. The two Spanish-language ads are among the first to be filmed in Cuba by an American-based company since the 1962 U.S. embargo.

"Cuba is an important market for us," said Laston Charriez, senior VP-marketing, Americas at Western Union. "We wanted to be there first and make it relevant and breakthrough."

Colorado-based Western Union, which operates in every province and municipality in Cuba, has provided money transfers from the U.S. to Cuba since 1995 and began making payouts in the country's local currency in 2011. U.S. remittances to the once closed-off island currently reach 62% of Cuban households, according to analysis by the Havana Consulting Group for Western Union. Western Union said the average value of a money transfer to Cuba from the U.S. is $150.

The new spots give Americans a glimpse at Cuban life and the real people who receive funds through the money-transferring service. They center on four real Western Union recipients including a man who refurbishes mattresses, which are rarely bought new in Cuba; another who fixes umbrellas that are not easily replaced on the island; a hairdresser who uses homemade products; and a man who repairs windows on vintage cars. About 57% of people in Cuba who receive funds from friends and family in the U.S. want to expand or establish micro businesses like these, according to the Inter-American Dialogue, the Cuban Research Institute and the Association for the Study of the Cuban Economy.

"We wanted to show people what Cuba is all about… and the ingenuity of what [our recipients are] doing to thrive and survive in Cuba," said Mr. Charriez. "It's been 50 years since we had the ability to go there legally and bring that back to our consumers... Many of them can't go back to Cuba or many haven't been to Cuba."

Bringing those stories to life was a logistical feat for Western Union's lead Hispanic agency Bromley. To create the ads, it worked with production companies Massimo Producciones and Cuban-based Vedado Films. The U.S. team was able to secure the appropriate permits and working visas from the Cuban government to shoot locally using the local affiliate's connections. But the team had to be flexible during shooting, which took two weeks, because they lacked many of the resources they were used to in the U.S. 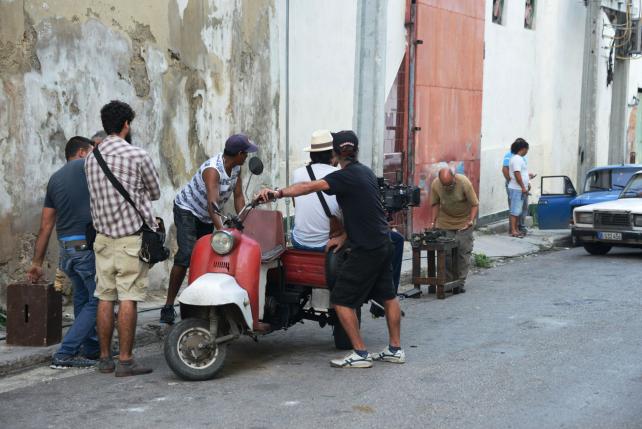 On the set with Western Union in Cuba.

There was no wardrobe department, no script supervisor, and sometimes, no water and electricity, Ms. De Lopez said. In lieu of a dolly, the team affixed a camera to the back of a motorcycle, which they wheeled with the cameraman on a flatbed. There was also no cell service or WiFi connection, so they relied on local phones and apps to stay in touch.

Florida, which has a large Cuban population, accounts for two-thirds of Western Union's money transfers to Cuba, the company said. The area is also home to exiles who are against normalizing relations with Cuba, but so far, the company has not received any negative pushback for the campaign, Mr. Charriez said.

Western Union is not the only business to set its sights on the Cuban market. Travel brands like AirBnB and JetBlue have begun operating on the island, and Carnival Corp., announced plans this week to sail to Cuba in 2016. Netflix also became available in the country in February.

Brands considering advertising to Cuban audiences should be careful and strategic about how they enter the market, because it's unknown territory for many, said Daisy Expósito-Ulla, chairman-CEO of d expósito & Partners and a Cuban-American.

"Sending money, travel these are are obvious categories," said Ms. Expósito-Ulla. "[Cuba] is a country that's eager to consume and eager to be part of this global society. I think there will be many opportunities, but I would be cautious."

"This Is Cuba" -- airing in the Miami designated metro area -- ties into a broader campaign from the financial service called "This Is WU," which was created by McGarryBowen and has the tagline: "moving money for better."

~ ~ ~
CORRECTION: An earlier version of this incorrectly stated that 57% of people using Western Union in Cuba wanted to start micro businesses. That percentage applies to the broader population who receive funds from people in the U.S.