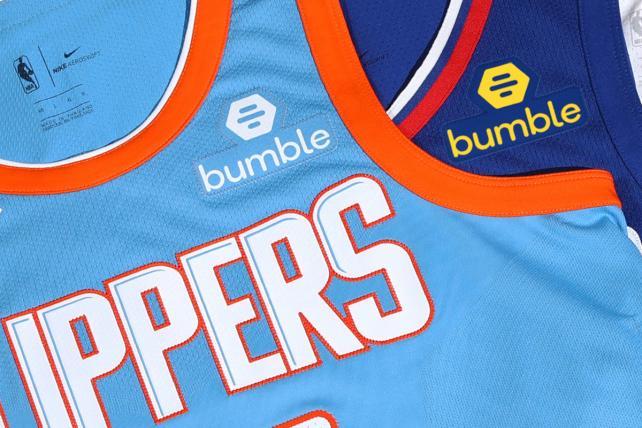 Bumble, a social network company best known for a dating app where women make the first move, will place its logo on the uniform of the Los Angeles Clippers basketball team.

Bumble will pay about $20 million over three years, according to a person familiar with the deal who asked not to be identified because the terms are private. It's part of a broader agreement between the company and Steve Ballmer's NBA franchise.

Bumble founder Whitney Wolfe Herd said she was drawn to the NBA's global footprint and, more importantly, the team's commitment to gender diversity. The Clippers have the largest female leadership team in the NBA under President of Business Operations Gillian Zucker. This is the first year the league has allowed ads on players' uniforms, and so far teams have sold sponsorships from around $5 million to $20 million a year.

"We saw the opportunity to create change together," Wolfe Herd said in an interview. "When you see this logo it stands for something more. It stands for empowerment."

The Clippers and Bumble declined to comment on the financial terms of the partnership, which includes off-court initiatives such as educational and mentoring programs and the creation of an advisory board for industry leaders.

Among other deals for space on NBA uniforms, StubHub is paying to appear on 76ers jerseys, Squarespace has a deal with the Knicks, GE backs the Celtics, Goodyear is with the Cavaliers, Walt Disney World is using the Magic and the Japanese e-commerce brand Rakuten appears on the uniforms of last year's champion, the Warriors.

In an interview, Ballmer said the Clippers held talks with a number of companies but found the opportunity for alignment with Bumble "fascinating."

"It's a great opportunity to associate a brand, mostly with women, with sports -- and the Clippers," Ballmer said. "There just aren't that many presidents of any sports teams who are women and well-equipped to make that bridge."

The NBA, as a whole, has done better with gender diversity than other major U.S. pro sports leagues. Last year, for instance, the NBA received a B grade for its gender hiring practices from the University of Central Florida's Institute for Diversity and Ethics in Sport. Major League Baseball and the NFL each got a C.

Last season, women accounted for 47 percent of the league's 127 million U.S. viewers, the NBA said. Female NBA viewership is up 16 percent this season, the league said.

As for Bumble, in October the company rolled out BumbleBizz, which is designed to help professionals network. As with the dating app, women need to begin the discussion.

Bumble had 29 million users as of last week, according to a spokesman. The company is controlled by Andrey Andreev, a Russian entrepreneur and the founder of Badoo, a dating site popular in Europe and Latin America.

On the court the Clippers are 34-28, battling several clubs for the eighth-and-final playoff spot in the Western Conference.