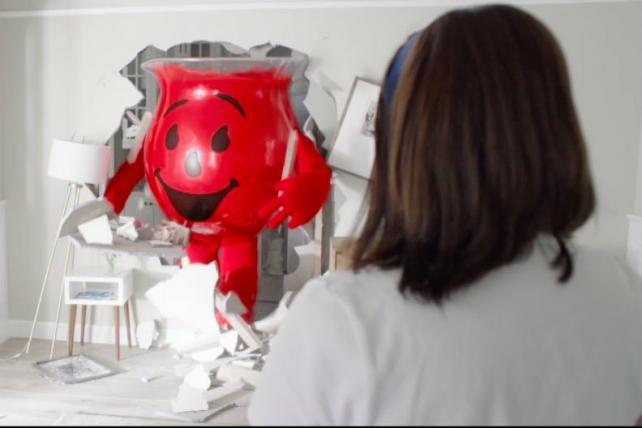 It's a meeting from marketing land. Progressive Corp.'s Flo hangs out with the Kool-Aid man in a new commercial designed to boost awareness of the insurer's home offerings.

In the 30-second spot, which begins airing on national TV this week, Flo visits her neighbor and learns that the family patriarch is none other than the red drink-filled, wall-crushing Kool-Aid man. As he breaks out his "Oh, yeah!" catchphrase and knocks down some of the house, Flo remarks that it's fortunate the family bundled home insurance with car insurance for the ultimate savings.

"Progressive is kicking down the wall into the homeowners space…literally…with this spot," said Jeff Charney, who has been chief marketing officer of 79-year-old Progressive for more than five years. "We've made a strategic move into the homeowners' space, and as a result we're adjusting some of our creative to reflect that focus." The Mayfield Village, Ohio-based insurance firm has used Flo in its marketing for nearly a decade.

The company, which worked with Kraft Foods for approval of the use of its Kool-Aid character, regularly engages in what Mr. Charney calls "memory lane marketing" in order to connect with consumers. He noted that the use of the Kool-Aid man should tap into consumers' nostalgia, especially for an audience that is buying home and auto insurance. During the Super Bowl this year, Progressive rolled out its own Bingo game in lieu of a traditional TV ad.

The spot, which was created with Boston-based Arnold Worldwide, will run through July. The insurer plans to supplement the effort with social posts on Flo's own Facebook page.

Mr. Charney declined to disclose how the campaign's budget compares with last year. In 2015, Progressive spent $515.9 million on measured media in the U.S., according to Kantar Media.