Widespread Use More Than Two Years Away, Exec Predicts
READ THIS NEXT
Salesforce’s Shannon Duffy on prioritizing trust in customer relationships

TV's biggest buzzword at the Consumer Electronics Show may be 4K, with talk even leapfrogging ahead to 8K, but many content providers and media executives are holding off on getting excited about the higher-definition standard. 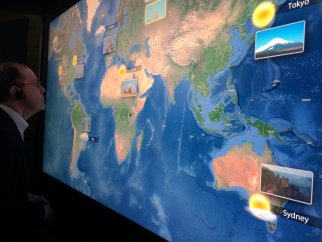 A Sharp 8D screen at CES. Japan is already planning to broadcast the 2020 Tokyo Olympics in 8D

"Bored" and "desperate" were words used by some executives at TV networks, marketers and media agencies on the show floor this week to explain why TV makers like Samsung and LG are making a big push into improving the resolution of the living room screen. While the ultra high-definition screens pack four times the resolution of current HD TVs, they only look noticeably different on larger sets. And the business case for adopting the new standard is still a ways off.

"It's the very early days," said Scott Teissler, exec VP-chief technology officer and chief digital strategy officer at Turner Broadcasting System. "The video quality is impressive but the business economics and technical delivery of 4K files and signals need to be solved before this can be scaled across the industry."

For 4K, the biggest hurdle will be in producing content. "The model needs to be absorbed into the existing cost structure," Ms. Choi Owens said. "To support different formats is an operational headache."

While 4K may make sense for certain types of content like sports and animation, for other scripted programming it might not make much of a difference, Ms. Choi Owens said.

Elizabeth Huszarik, exec VP, media research and insights at Warner Bros., said that unless there's an easy and relatively cost-effective way to shoot in 4K it will be difficult to get off the ground. "That's a lot of content to push into the pipe," she said during a CES panel titled "Video Anytime Anywhere: Understanding the Value Proposition."

Bandwidth may be one of the biggest obstacles when it comes to 4K, adding pressure to the already constrained pipeline.

"Some of our content lends itself to this enhanced viewing experience, but we are not yet fielding many inquiries from our distribution partners around delivering this video format," said Tamara Franklin, senior VP-affiliate operations and new media distribution at Scripps Networks Interactive.

Ms. Franklin said mass adoption for 4K is still more than 24 months away given the replacement cycle of TVs and price. 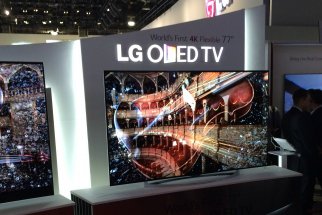 4K TVs from LG at CES

Still, content providers are starting to adopt the technology. Netflix said this week it will stream the next season of "House of Cards" in 4K to LG and Samsung TV sets, while Comcast, Paramount, DirecTV and Amazon have similar arrangements with Samsung. YouTube also showed off its new 4K streaming technology at several hardware manufacturers' booths.

For the creative side, 4K will also change the way ads are produced, Ms. Choi Owens said.

But Turner's Mr. Teissler does see potential for the technology in the colors it can produce beyond HD and in its high frame rate, especially for sports.

"The consumer proposition will develop as prices fall and people perceive value in enhanced content," he said.

Despite the prediction that 4K is still two years off, Scripps has begun planning for the implications of 4K as it applies to storage capacity and workflow given the increased size of the video files.

While HD took 10 years to be deployed, Mr. Gotlieb expects 4K will be implemented more quickly. "We have a smartphone that can shoot in 4K and movies and a number of TV shows are already shot in 4K," he said.

The investments being made in 4K TVs by manufacturers could be taken as a sign that content delivered through TV screen isn't going away despite the rise of other screens, said Shelby Saville, exec VP-digital, Spark SMG. "The TV in the home is still very powerful," she said.