Commercial production company Cap Gun Collective has opened a Los Angeles office, hiring Jason Botkin as executive producer. Botkin (pictured, left, with founding EP Matt Abramson) was most recently as EP for Furlined, prior to which he was the founder and managing director of music video company Streetgang Films. Cap Gun Collective, which was originally founded in Chicago in 2009 and opened an office in London in 2011, has also launched an original content offering, Cap Gun TV (CGTV) and a new website. 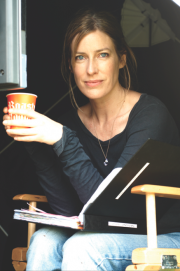 Feature film group Strange Weather Films has formed a strategic partnership with The Sweet Shop, which will see it developing and co-producing feature film content for the The Sweet Shop's roster of directors. The joint venture's first project will be directed by Melanie Bridge (pictured) and will be based on an original book by author Jay Furby. Strange Weather leads Andrew Adamson, Aron Warner, and Jeffrey Fierson are responsible for films including Shrek, The Chronicles of Narnia: the Lion, the Witch, and the Wardrobe and 21 Jump Street.

Production studio Breed has signed directors David Lodge, Simon Robson and Thomas Cobb to its roster and hired executive producer Peter Steinzeig to head up its Los Angeles office. Steinzeig is a former executive producer with Backyard Productions and Pixomondo, and will work with company founders and executive producers Rich Rama (right) and Zak Thornborough (left) to develop the year-old shop. Lodge has been represented for commercials in the UK by RSA London since 2007, and has shot spots for brands including McDonald's, Vodafone, BT, Ikea and most recently, "Aliens" for Kellogg's. Robson specialises in a hybrid animation/live action style which he has used on spots for W+K London, 180 Amsterdam and DDB, Sydney. He joins Breed from Animal Logic. Cobb is the founder of his own live action production and motion-design company whose recent work has included the opening sequences for Homeland and Weeds.

Editorial house Spot Welders has expanded by launching a new VFX company, Shipping and Handling, appointing VFX supervisor Casey Price and executive producer J. Patrick McElroy to head it up. The new company, housed in a collection of shipping containers on the Spot Welders property in Venice, CA, will work with outside clients as well as on Spot Welder projects. Price (right) has worked both as a VFX artist and supervisor, with work including Visa's 2008 Olympics campaign, while at D-Train. McElroy (left) takes on the development of the new division from his previous position as producer at Spot Welders, where he has been for three years.