All the Latest Creative Moves From Around the Industry
Nick Kaplan
Credit:

Barton F Graf 9000 has hired Nick Kaplan as a creative director. Kaplan joins Barton from Wieden + Kennedy N.Y. where he worked on Equinox, Southern Comfort and ESPN. His previous agencies include the former Amalgamated (Silver & Partners) and BBH NY where he worked on Carmax, Axe and Johnnie Walker. 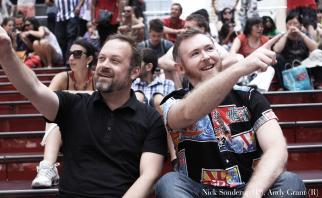 New York-based agency Translation has added creative director duo Nick Sonderup and Andy Grant to its team as the first major creative hires under the tenure of CCO John Norman and ECDs Jay Berry and Marc d'Avignon, who were brought on board in early 2014. The pair will focus their work primarily on the agency's State Farm initiatives,. Sonderup joins following a three-year run at BBDO, and nearly five years at Wieden + Kennedy before that. Grant joins Translation from Crispin Porter + Bogusky, where he helped to create "The Selfie Shootout," starring Kobe Bryant and Lionel Messi, which garnered 138 million YouTube views. Prior to that he worked as an ACD and art director at agencies including BBH Singapore, WCRS London, TBWAHunt Lascaris, Johannesburg, Ogilvy Prague, and others.

Crispin Porter + Bogusky has named David Corns to the newly created role of VP/director of product & brand invention. Corns will be moving to the Product Innovation Group based in Boulder and led by Neil Riddell, EVP/executive director, product innovation. Corns joined CP+B in 2006 as the agency's first European-based employee and was tasked with relaunching the Burger King brand in the U.K. while also laying the foundations for CP+B in Europe. After two years he relocated to Miami to help run the Burger King U.S. business, later adding Coca-Cola Zero and Applebee's to his roster. Recently he has overseen two product invention brands at CP+B: Angel's Envy and Papa's Pilar.