DOJO San Francisco has hired John O'Hea as a creative, reporting to Geoff Edwards and Mauro Alencar. O'Hea comes directly from Goodby Silverstein & Partners where he was an art director/ACD, having previously worked as art director at agencies including Bates USA and BBDO. His work, for clients such as Sprint, Chevy, Commonwealth Bank of Australia and AIDES, has received awards from major shows including: London International Awards, Clio Awards, New York Festivals, Kelly Awards and Cannes Lions.


AKQA is opening an office in Paris with Nike as its founding client. The creative team at the Paris office, which will be the agency's eighth worldwide, will be headed by Peter Lund as creative director, and Nicolai Smith as associate creative director. Both will report to James Hilton, chief creative officer at AKQA Europe. Lund and Smith have worked at AKQA offices in Shanghai, Sao Paulo, New York and Paris, having studied at The Danish Institute of Media and Journalism. Julien Veillon, associate creative director and a native French copywriter, will partner with the team. The office, located in Saint Germain, plans to recruit an additional 40 people during 2012.

RhinoFX founder Vico Sharabani (pictured, right) and Alex Frisch, co-founder of Method Studios (left) have teamed up to launch COPA (Co-Op of Artists), a collective of VFX artists working in the commercial and feature film space. The new group is structured around COPA headquarters in LA and New York. It will be anchored in NY by EP Yfat Neev, former Rhino and Gravity FX EP, and in LA by acting EP Steve Reiss, former Speedshape and Sea Level VFX EP. The studio's work has already included the music video "Turn me On" for David Guetta and Nicki Minaj, 150 shots for the feature film A Late Quartet, and a new P&G commercial for Leo Burnett directed by Dave Meyers from Radical Media. 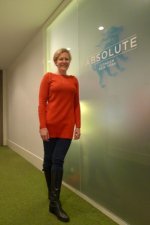 Absolute Post New York has appointed Melanie Wickham as executive producer, while her predecessor, Sally Heath, has moved to the role of joint managing director, working alongside Andy Barmer in the company's London office.Wickham began her production career at The Mill, where she spent seven years in both the London and New York offices as a producer and then senior VFX Producer. In 2007 she joined Animal Logic Sydney, where she was later promoted to executive producer. Most recently, Wickham has been freelancing at The Mill Los Angeles. Some of her latest work includes: Adidas 'Bull' for Imperial Woodpecker and 180, Toyota 'Built' for MJZ and Saatchi & Saatchi, and a Reebok campaign for Smuggler and McGarryBowen.

Moonlink Studios & Cutters Editorial have added Jim Talbot to their team. Talbot will be available as both a director of photography for Moonlink Studios and a creative editor at sister division Cutters Editorial. Moonlink Studios is the production services and studio operations of RingSide Creative. Talbot has held positions at Griot Editorial, Blue Highway and Image Express for clients including Ford, GM, Chrysler, Ace Hardware and the U.S Navy. He has worked as a director of photography on projects for the University of Michigan, Team Detroit, Borg Warner, Taylor Global, Birmingham Public Schools and Light of Hope Home & School for Girls (near Nairobi, Kenya) among others.

Digital shop Layer One Media has opened a new office in Chicago. Jason Reimer (pictured), who joined the company two years ago, will be creative director, with Brody Buss as president and Ryan Janecek as director of business development. Reimer has worked in the industry for 15 years with experience on active lifestyle brands including Trek Bicycles and Nike Cycling.