Art Center College of Design in Pasadena has named Gary Goldsmith, the former creative chief of firms such as Lowe Worldwide, DDB, Chiat/Day and Young & Rubicam, as chair of its Advertising Department. Goldsmith was the co-founder of Goldsmith/Jeffrey, a New York agency that was acquired by Lowe Worldwide and the Interpublic Group in 1997. At Lowe, he rose to the level of chairman and chief creative officer of North America. He has also held the positions of co-creative director of the Chiat/Day New York office and chief creative officer of North America for Young & Rubicam. He was the founder of Adhouse; a former faculty member of the School of Visual Arts in New York; and a guest lecturer at NYU Stern School of Business. For the last few years he has taught a 10-day course entitled "Crashvertising" at Art Center, and is the co-founder, with Robert Reiser, of Underhead, a network of creative resources and companies.

Stinkdigital has recruited PJ Ahlberg as creative technologist and Marco Rosella as a front-end developer. Ahlberg (left) has spent over four years at Sarkission Mason as senior interactive developer and prior to that, worked for over two years at digital creative agency Firstborn, where he was interactive developer / designer. He has worked on digital experiences for brands including Dedon, CNN, Ferragamo, HBO and more. At Stinkdigital, he will focus on front-end web technologies, physical computing and interactive video.

Rosella (left) will work across the full range of Stinkdigital clients. He has worked for over seven years as a freelance front-end developer and web designer in Milan. During this time he launched his own blog, Central Scrutinizer Studio. Previously, he held developer and designer posts at Milan-based shops Go Up Communications, Kora and Dodicitrenta, working on brands including: Vodafone, MTV Italy, Hello Kitty, Conde Naste, Lavazza and Cathay Pacific. Before that he was a developer and user interface designer for the Government agency, CNR -National Research Council in Pisa. 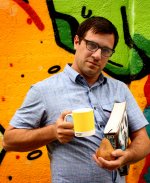 Mixed-media production studio Roger has expanded its team, hiring Drew Neujahr as executive producer. Neujahr was most recently head of production at King & Country, and previously served in the roles of art director and producer at other studios, such as Belief. He has co-directed several projects under the name Slowtron, garnering awards at the Slamdance Film Festival, among others.

Indianapolis-based advertising agency Young & Laramore has added three new recruits. Cory Furman joins as brand action strategist, Peter Johansen as art director and Zac Neulieb as graphic designer. Most recently, Furman was the assistant athletic director at Messiah College in Grantham, Pennsylvania. Johansen recently earned his Master of Arts in advertising and creative communications from the University of Texas in Austin, and served as an intern for the art director at Door Number 3 in Austin, Texas. Neulieb previously served as interactive director at Morse & Company Advertising in northern Indiana.

Keith Barzano has joined Layer One Media as a senior front end developer in the Chicago Office. Barzano joins from Critical Mass where he was a senior developer and front end user experience technical lead. He has also held roles at the Chicago Tribune, Agency.com and Conquent.