"The CP+B adventure has been one of the most amazing I've had the opportunity to participate in," Winsor says on his blog. "I feel exceptionally fortunate to have had the opportunity at CP+B to help create more momentum for planning, start the product innovation practice and, of course, write Baked In [a recently released book on integrating product innovation and marketing]" with Alex [Bogusky, CPB Co-chairman]."

Winsor, an active outdoorsman, explains that a few weeks ago on his 50th birthday, he made his Nth solo climb of Colorado's First Flatiron and decided "that I needed to embark on another entrepreneurial adventure to explore new territory," he writes. Bogusky, he adds, "has been a part of the conversation since that day." Before joining Crispin, Winsor was a successful publishing entrepreneur who went on to form consulting company Radar Communications, which specialized in market research on consumer behavior. In 2007 the agency acquired Radar and brought Winsor on board. The aqcuisition helped to beef up Crispin's design capabilities and led to the formation of its Cultural Radar department. "The agency's products department is now closer to a design studio's, where you've got anthropologist and people from social sciences and journalists," Winsor told Creativity last year. "It means a broader way of thinking about the cultural effects of something, about what can be solved." Winsor notes on his blog that he will continue his partnership with Bogusky on Baked In.

In other Crispin news, former Leo Burnett VP/Director of Creative Recruitment Kara Taylor has joined the agency as creative recruitment director. The agency also brings Dan Ligon on board as interactive associate creative director. He was previously an ACD at AKQA in San Francisco and has worked on projects for The North Face, Flip Video and Kraft. Tom Miller has also joined the agency as creative director. Miller previously worked at TBWA/Chiat/Day, New York, on NYNEX Yellow Pages, Reebok and MTV; at Goodby, on E*Trade, Nike, Milk, Budweiser; and at Merkley+ Partners, on Mercedes, BMW Motorcycles, The New York Post and Arby's. 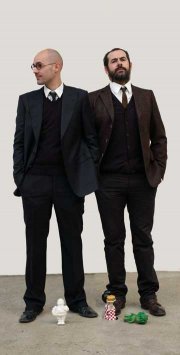 Herve DeCrecy and Francois Alaux, two-thirds of directing/design collective H5, are now being represented as directing duo Herve & Francois out of Little Minx in the U.S. and the U.K. H5 is behind the Logorama short film, and the announcement follows news of the team's recent split, with the collective's Ludovic Houplain retaining the H5 name. Herve & Francois are currently working on a Nokia project out of W+K, London.

Director Luc Schurgers, founder of the Minivegas directing collective, has signed to Green Dot Films for representation in live action, animation and interactive in the U.S. Minivegas was previously repped out of Anonymous Content in the States.

Husband and wife directing team Masayoshi and Magico Nakamura, aka Who-Fu, has signed to GL-X, a division of Grand Large Inc. for exclusive representation in spots, music videos and branded content. The duo is behind the recent "Hibi No Niero" clip for the Japanese band Sour, and has also directed projects for PlayStation and Fuel TV.

In an move to build up its design and 3D offerings, music/design shop Fluid is partnering with Piranha design. Piranha graphic designer Rob Sabatini (left) and 3D artist Gaspard Giroud will now be part of the Fluid roster.

Michelle Cheney has joined Cheil U.S.A. Inc. as associate engagement director. Cheney was previously account director of Team A3 in Dallas and also worked at DDB Worldwide and BrannForbes in Dallas.

Designer/programmer Mikko Martikainen has joined the 3D team at Finish. Mikko has previously worked at Method, The Mill and Glassworks, on clients includig Pepsi, Samsung, Ford, Coca-Cola and the feature film Poseidon.

The Mill Studio, which opened earlier this year to house The Mill's desktop VFX solutions like Shake, After FX and Final Cut Pro and to accommodate digital platform projects and lower budget work, has been integrated into The Mill across all departments and projects. The company has also named Nils Kloth as senior designer, whose past projects include work for Samsung, Sony Alpha and Sky Cinema. The Mill's senior Nuke Compositor Darren Christie has also been promoted to head of Nuke.

Rhino, formerly known as RhinoFX launched an L.A. based studio. The move follows the company's recent integration of its Connecticut, N.Y. and Tel Aviv offices, transforming it into the Rhino-Gravity Group.

Kipany Pictures has launched as the commercial and film-specific division of Kipany Productions. VP/EP Melissa Levins will head the company, which features an international roster of 19 directors, designers and artists. It is currently working on its first project, a series of web spots for Rite Aid.