Deutsch LA has hired Davi Sing Liu and Xavier Teo, both formerly of Modernista!, as integrated creative directors. The duo will work as a team and report directly to chief creative officer Mark Hunter. Liu (left) was a creative director at Modernista!, working on clients including Showtime, Nickelodeon, Product Red, and Food Should Taste Good. Prior to joining Modernista!, he worked in Asia for seven years, including at Wieden+Kennedy developing campaigns for Nike Japan and China. He also worked on several projects for Google Japan and W+K Tokyo Lab. He has also taught photography at Temple University Tokyo and at the School of the Art Institute of Chicago. 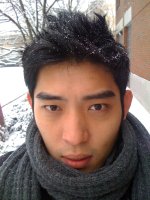 Teo (left) was a digital creative director at Modernista!, working with clients such as Cadillac, the National Parks Foundation, Nickelodeon, and Product Red. He also led the development of an Alternate Reality Game for Showtime series, Dexter. Before joining Modernista!, he worked in Singapore for 12 years on regional campaigns for brands including Levi's, DHL, Johnnie Walker, Yahoo!, and Unilever. He is also an artist whose artwork has been featured in Computer Arts, Beautiful/Decay, and International Designers Network and at the Massive Territory Design Conference.

BBH New York has recruited Will Misselbrook as head of interactive production. He previously worked in London for communications agency Imagination, as production director / executive producer. Prior to that he headed up the interactive production department at Saatchi & Saatchi in London, working as an executive producer on integrated campaigns across clients such as Visa, NSPCC, Cadbury's, T-Mobile, Continental Airways, Procter & Gamble and Toyota. He has also worked at Halfords Media, in digital production at Wieden + Kennedy (London) and in production at the Wax Agency (formerly Draw Pictures).