People news from Pitch, The Mill LA and more

The Mill L.A. has promoted Arielle Davis from senior producer to head of production, and hired Lusia Boryczko as design producer, Design and Creative Direction division. Davis, (left), who joined The Mill in 2007 and is a founding member of the L.A. team, has produced work such as Old Spice 'The Man Your Man Could Smell Like' and Super Bowl spots including last year's Audi 'Release the Hounds'. Boryczko has produced for Gentlemen Scholar, Blind Visual Propaganda and Foundation Content, and has worked with agencies such as BBDO, DDB, McGarry Bowen and Leo Burnett.

Brooklyn-based Greenpoint Pictures has added new directors Nick&Ben and Rodney Ascher to its roster. Nick&Ben (left) have directed for brands like Kodak, Google, AT&T, Virgin Mobile, GE, Atari, Ronzoni and HBO's True Blood, as well as music videos for Warner Brothers and EMI. Ascher directed the Converse 'I'm a Goner' music video for Anomaly, and his latest project is a feature film called Room 237, which will premiere at Sundance 2012. 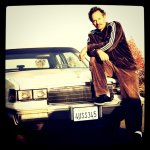 Frank Effron has rejoined Cut + Run as an editor after a brief stint at Sitch. Effron will be based out of the Los Angeles office with global representation via Cut + Run's New York, London and Hong Kong locations. Effron has worked on campaigns including Jimmy Dean 'SloMo Man' & 'Dimwit' with Perlorian Brothers for TBWA/Chiat/Day, Hyundai 'Driving Sheep' & 'Childhood'with Stylewar for Innocean, and Mercedes 'The Escape' with Carl Erik Rinsch.