Saville has signed comedy director and screenwriter John Hamburg for commercial representation in the United States. Hamburg is the director of comedy films including I Love You, Man starring Paul Rudd and Jason Segel, and Along Came Polly, with Ben Stiller and Jennifer Aniston, as well as TV show New Girl starring Zooey Deschanel. He also worked as a screenwriter on films such as Meet the Parents and Zoolander. 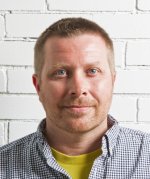 CP+B has hired Sean Ganann as a creative director based in the agency's Toronto office. Ganann comes to CP+B from fellow Toronto agency Zulu Alpha Kilo (ZAK). Before that he was creative director of transmedia storytelling agency Campfire and digital creative director at Anomaly in New York City. He also previously headed digital creative at Saatchi & Saatchi Sydney and as executive creative director built the creative department of interactive agency NetX. Ganann has created campaigns for clients including Virgin Money & Mobile, Coca-Cola, Lexus, Snapple, Verizon, Discovery Channel, Intercontinental Hotels, 3 Mobile and IBM. He has also sat on juries for Cannes Lions, The One Show, ADC and London International Advertising Awards, among others.

The Sweet Shop has added animation director Pete Circuitt to its global roster. Circuitt's work has included 'Yes, Virginia', the CGI animated Christmas special for Macy's and JWT New York, which won Gold and Silver Pencils and a Silver and a Bronze Lion. His work 'Monster' for Microsoft ZUNE, which he wrote, directed and animated, won an AICP award for animation. Originally from New Zealand, Circuitt has also worked with brands such as Carlsberg, Nestle and Budweiser and musicians such as Laura Marling.

Brand New School has appointed Sean Dougherty, one of its first original employees, as a creative director and director. Dougherty, who became the company's senior art director before leaving to go freelance in 2007, has served as associate creative director and director for Superfad in New York since 2010. There, he worked on campaigns for clients including Target, Starwood Hotels, Ritz Crackers, Macy's and Bloomberg. He also directed a seven-minute segment of 'A Liar's Autobiography 3D,' the stereoscopic 3D feature film on the life of Graham Chapman from Monty Python. Prior to that, as a founding partner of design house Golden Lucky, he directed US and European commercials for FUEL TV, McDonald's and Virgin Media.

BBDO Atlanta has promoted executive creative directors Heather Gorman, Cabot Norton and Jeff Spillane to senior vice presidents. Gorman and Spillane (left) are an art director/copywriter team that have been with BBDO Atlanta since 2009, working on accounts including AT&T and the Florida Department of Citrus. They joined BBDO Atlanta from Crispin Porter & Bogusky. Norton (right) who joined BBDO Atlanta in 2010 from AtmosphereBBDO in New York, has supervised the agency's digital creative activity in addition to leading efforts on REI, Embassy Suites and other client businesses. Together, they will take on a number of the responsibilities previously handled by Pearce, Bobby Pearce, currently chief creative officer, who is leaving the agency and will not be immediately replaced.

Branding and design agency And Partners NY has promoted Brian Crooks and Craig Bailey to associate creative directors. Crooks, who joined And Partners in 2007 as a graphic designer, now leads all digital and interactive strategy and oversees the production of web assets and mobile apps with the programming and development team. His past work with the company includes annual reports, corporate communications design and real estate branding. Bailey, who joined the firm in 2009, oversees branding and communications. He has worked on projects for Fortune 500, real estate and retail clients.