Former TBWA CCO Mark Figliulo is officially hanging his shingle, as his agency, Figliulo & Partners, formally launched Monday. The agency, which already counts Sprint as a client, was founded by Mr. Figliulo, who also serves as chief executive officer. Joining the shop is Judith Carr-Rodriguez, who is founding partner and president. Ms. Carr-Rodriguez previously served as president at MRY and LBi.

180 L.A. has hired Pierre Janneau as creative director. Janneau, originally from France, joins the agency by way of Wieden Kennedy Amsterdam, where he served as group creative director for Nike, Electronic Arts (EA), ESPN, and General Electric. There, he created global campaigns for three consecutive years for FIFA at EA and launched Nike's "Just Do It" campaign in Turkey and Russia. He also launched the "Coke Side of Life" campaign and Nike Football's "Make the Difference." 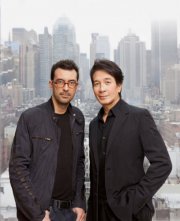 Andre Laurentino, executive creative director at TBWA/London and global creative director on McDonald's, is moving to Ogilvy & Mather as global ECD on Unilever. He will join Ogilvy in February 2014 and report to Tham Khai Meng (pictured, right, with Laurentino), Worldwide CCO. Laurentino will be based in London, the global hub for Unilever brands including Dove, Comfort and Hellmann's. He began his career as an art director in Brazil, and worked for agencies including DPZ and AlmapBBDO. In 2003, he became a copywriter at Lew'LaraTBWA, where he went on to become ECD. In 2011 he moved to TBWALondon where he won global business such Datsun, Aquafresh and the Adidas 2014 World Cup project.

Guilherme Jahara, executive creative director at Leo Burnett Tailor-Made Brazil, is to join WPP-owned Brazilian digital agency F.biz as chief creative officer in January. Jahara began his career as an art director at Artplan, and has worked at agencies including F/Nazca Saatchi, AlmapBBDO, Publicis Brasil and DM9DDB. He joined Leo Burnett Tailor Made two years ago, working on brands including Fiat, Carrefour and Samsung. His awards include 21 Cannes Lions, a Gold Pencil at the One Show and a Pencil at D&AD.