READ THIS NEXT
How restaurant chains are duking it out to be the best in their categories
Credit: Claude Shade

When it comes to Goodby creative duo Aaron Dietz and Mandy Dietz, officially speaking, "Aaron is the art director, and Mandy is the writer," they say, but the married couple's duties "flip-flop" constantly.

Professional partners since 2001 and personally hitched since 2003, the Dietzes started out at a small New England agency, Keller & Co., before moving to the West Coast in 2004. After a stint at AKQA, they landed at Goodby. There, they launched into exploits like the Sprint Now Network push, which Mandy says "might be the first fully integrated campaign that started with a website." Indeed, the online opening gambit gave the rest of the campaign a lot to live up to?the site was a multiplex of information, sprawling with windows of data, live camera streams and fun facts?a tangible demonstration of the brand's high-speed network. Elements that followed included digital outdoor takeovers and lively spots that served up a non-stop visual feast of random data.

The Dietzes also worked on Goodby's integrated Come to think of it, eBay campaign, repositioning the site from tchotchke repository to a shopping hub for more necessary purchases. Among the elements were comedic vignettes on the eBay home page featuring funnymen Jim Gaffigan and Kevin Hart pontificating about their fantastic buys?such as a toothbrush. Perhaps even more remarkable were, of all things, the banner ads?windows of entertainment hosting everything from a catwalk to a cooking show while showcasing wares sold on the site.

"To us, integrated efforts are best when they're integrated for a reason," says Mandy. "It's not about filling various media so you can say you did. Each execution should make sense on its own, make the most of its medium, and ladder up to a big thought." 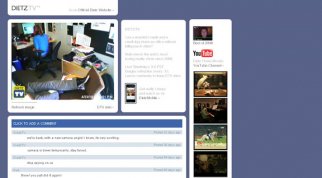 While the campaigns reflect the duo's broad range of talents, the pair admits they lean toward the "techie stuff"?in fact, you might say they live online. Their website DietzTV.com catalogs their work, musings and interests and even features a live camera broadcasting the goings on in their office. Though "it's kind of ridiculous," says Aaron. "Nothing ever really happens. Metrics show that at least one person visits per week. It's probably Mandy's aunt."