Creatives You Should Know: Tomohiko Hayashi and Kensuke Sembo 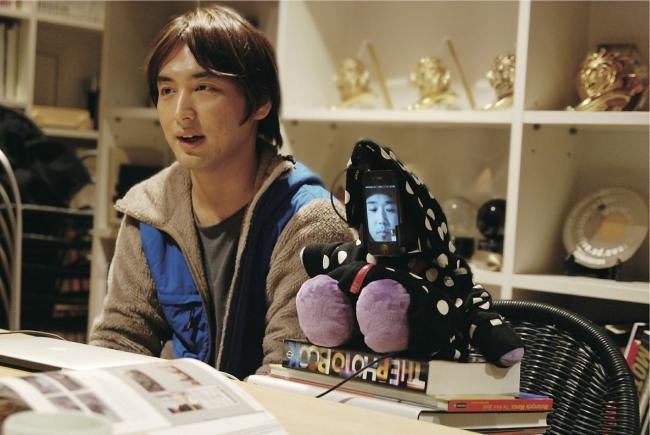 Japanese are known for their unfailing politeness. But shoppers at a central Tokyo mall can't help but gape openly when Tomohiko Hayashi walks by chatting with a gesturing robot in his arms.

"Nubot" wears a polka-dot hoodie and has an iPhone for a face. It was invented by Nuuo, the creative start-up composed of Mr. Hayashi and Kensuke Sembo. The pair's mission is to enrich lives and enhance relationships through technology.

"The relationship between web and life is not completely good. These days, sometimes social media and too many emails interrupt our lives," says Hayashi, formerly an interactive planner at Hakuhodo. "So we want to make good the relation(ship) of our daily life and web."

Japan was devastated by a massive earthquake and tsunami last year, and Nuuo thought Nubot could help connect families forced to live apart following the disasters. Using Skype video, a user can virtually participate in meetings and meals, and even move Nubot -- it can turn, wave and bow -- by pushing buttons on the dialpad.

Hayashi, 31, who's based in Tokyo, and Sembo, 39, living in the southern city of Fukuoka, holding meetings via robot. Sembo also participated in this interview through Nubot, perched on the cafe table amid mugs of milk tea.

The Nuuo partners initially connected through Sembo's work as a media artist, though he also freelanced in advertising. His work includes 2006's "Big Shadow" for Microsoft Xbox 360's Blue Dragon game. Using computers, a fan's shadow avatar was projected onto the side of a large building in Tokyo's Shibuya neighborhood, where it battled the shadow of a giant dragon in real time.

Nuuo was officially formed last year -- the name doesn't mean anything, Sembo's baby daughter tapped the letters into his iPhone one day while playing with the gadget -- and one of their first projects was the "Tiny Riot" app.

It lets users record a heavy metal soundtrack by shaking their smartphones. But the creators had a deeper purpose -- giving socially constrained Japanese an outlet to vent their anguish following the earthquake and tsunami.

"We thought we want to make a noise ..." says Hayashi."... to express distress," Sembo adds."And to express our feeling of stress and anger and fears for the future," finishes Hayashi.

Nuuo remains independent, though some of its clients come from Hakuhodo. Hayashi even has a working key card to Hakuhodo's offices and sometimes holds Nuuo meetings there.

"They are very kind," he says more than once about his former employer.

So far Nuuo is receiving warm feedback from clients. "They are free from stereotypical views. Nuuo's proposal is always based on their unique viewpoint," says Momoko Yoshimura, a marketing executive at KDDI. "They are free. They work with pleasure."

Nuuo's latest venture is a center in Fukuoka, called ID Password, where creative folks can gather to work and trade ideas. Messrs Hayashi and Sembo aim to open more outlets in places such as New York, London, Amsterdam and South Africa, linking them together to create a worldwide idea exchange. (More info here, Japanese only)

Even the logo of ID Password is based on connectivity -- it's modeled after the symbol for the Internet cable slot in the backs of computers.

As for Nubot, so far there's only one. The Nuuo duo are looking for partners to help produce the robot, which cost about $250 to build with the help of a friend who's an electrical engineer.

"If we collect 100 (people) who want to buy Nubot, we can make Nubot," Hayashi says.

Check out the full list of Creativity's 2012 Creatives You Should Know.