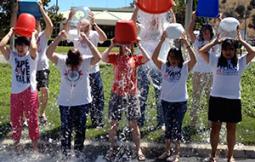 It was almost impossible to miss the "ALS Ice Bucket Challenge" this past summer. Videos of people pouring ice water on themselves to raise money for amyotrophic lateral sclerosis, and challenging friends to do so raised more than $34 million for research into ALS, also known as Lou Gehrig's Disease. The push attracted participants from Bill Gates and former President George W. Bush, to Oprah and Lady Gaga to brand mascots (see Old Spice's "The Man Your Man Could Smell Like" above) and agency professionals (see RPA's ECD Jason Sperling below) .

But the credit for the campaign's breadth and impact does not go to just one person. Charitable (and silly) ice-water baths have been around for a while, especially in golfer circles. On July 15 (the same day Matt Lauer did the challenge for another cause), golfer Chris Kennedy challenged a relative, Jeanette Senerchia, whose husband, Anthony, has ALS. Her town and social networks then took the cause up, and it eventually reached Pete Frates, who also has the disease. He had been a college athlete in Boston, and his athlete friends spread it in his honor. From there, it was unstoppable.