Chef, Author, Executive Producer and Media Personality
READ THIS NEXT
How restaurant chains are duking it out to be the best in their categories 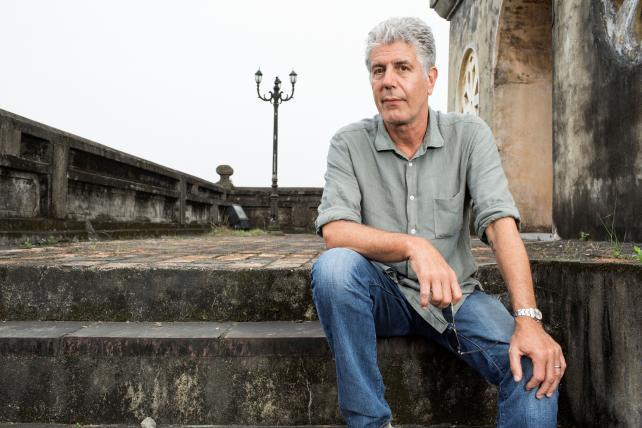 Anthony Bourdain has come a long way since "Kitchen Confidential." The popular autobiography that catapulted him to media-personality stardom is just one of the many achievements on his perpetually-growing resume. The chef-turned-author can now add publisher, TV writer, executive producer, voice-over artist and graphic novelist to the list. His popular CNN show, "Parts Unknown," takes viewers to places from Massachusetts to Madagascar using food as a portal to new cultures and unfamiliar histories.

"The Taste," the cooking competition series he hosts and executive produces with fellow food celebrity Nigella Lawson, is currently airing on ABC. But Mr. Bourdain maintains that selecting a new project should be simple.

"I like making stuff, that's what's really satisfying," he said. He also said choosing collaborators should be instinctive -- in his case, adhering to his "no asshole" rule. "In my life, I try to make all of my business and creative decisions based on picking up the phone and 'Is it gonna be an asshole on the other end?'" he said. "I've been very fortunate in that regard."

Ad Age caught up Mr. Bourdain to discuss his projects and his thoughts on creativity. Read a condensed version of the interview below.

Ad Age: How do you go about choosing your projects?

Anthony Bourdain: I like learning stuff, I like going to a bunch of cities where I don't speak the language and being faced with a very steep learning curve. But I also really enjoy being a part of a team, a machine. It's like being in a band, producing "Parts Unknown." What I describe as the strange and terrible and highly manipulative powers of the editing room and post-production, music and sound engineering as a means of telling a story -- that makes me happy.

Ad Age: So how did your work on "Treme," on which you were a writer, come about?

Mr. Bourdain: That's a pure example of someone whose work I admire showing up out of the blue and saying, "Would you be interested in being on the show?" My next phone call was to my agent and I said, "Look, David Simon is going to be calling and whatever he asks say 'yes,' immediately."

Ad Age: Was that a "yes" before you even knew what it was about?

Mr.Bourdain: Oh my God, I didn't care. David Simon's on the phone, I'll do anything he wants, I would have brought cappuccino for the crew. I feel the same way about doing VO for "Archer." I was basically a groupie -- that's a show. I'd write for them for free. In fact, I was trying to get on a writing table and apparently there is no writing table, it's all one guy.

Ad Age: Have you been sending in suggestions?

Ad Age: This makes sense, though. Voiceovers and animated series -- you're combining the writing and broadcast backgrounds.

Mr. Bourdain: It's not a calculated thing. What red-blooded, overage, not-fully-grown-up man-child wouldn't do that, given the opportunity?

Ad Age: Any tips for someone in a bit of a creative rut?

Mr. Bourdain: I don't know, when I was writing "Kitchen Confidential," I was absolutely certain that no one would read it and I had no time to write. I'd wake up very early, before my real job, write as much as I could and then go to work. Intelligently, I didn't read what I was writing until I had a pile of stuff. Had I continually read, I would have edited myself out of existence. I was writing for my own entertainment and a few people in a restaurant kitchen that I worked in at the time. Not giving a shit, that certainty that there's no chance of success, was very liberating for me.

Ever since then, I've always tried to divorce myself from the audience in the sense that I just don't care what they expect. If anything, I feel a perverse desire to undermine any possible expectations at every turn. So my advice would be, whatever it is that you're doing, whether it's writing or producing or painting or any creative venture, you're doing it for yourself, ultimately. People have been saying that forever, but I will tell you that not being afraid is a very good place to be, particularly in a business where creative people are generally ground under the wheel and the thing that allows them to grind you under the wheel is fear.

Television in particular is a business where everybody's afraid and what they're afraid of is that someday they won't be on television anymore. The occasional person who really and truly doesn't care -- that's a hugely liberating place to be and a strong negotiating position. The convict in prison who doesn't value his own life is in a strong negotiating position. I try to get as close to that position as possible.

In every venture meeting, I'm willing to walk away. If I can't do it the way I want to do it, I either won't do it at all or say "Fuck it, I'd rather not be on television or I'd rather not be published." And I mean it. I'll go back to brunch.

Ad Age: Some might say that a chef, in addition to being a craftsmen is an inventor.

Mr. Bourdain: I would disagree with that. It depends, I was not a creative chef -- I didn't invent anything. Those times I tried, I probably would have been better off not doing that, it just was not my forte. I was a craftsmen. It's one thing to create a dish, it's the ability to execute the same way every single time 'il the end of eternity that really sets you apart.

Ad Age: That's fair, but there goes my question about what you're proud of and your "greatest innovation."

Mr. Bourdain: Not in cooking, certainly. I'm proud of the fact I lasted 30 years in the business.

Ad Age: What's on the horizon? Any exciting projects for us to look forward to?

Mr. Bourdain: Working on a couple of film projects -- documentaries -- with my partners at Zero Point Zero Productions. I'll be executive producing. I'm working on an Asian hawker center-style project here in New York that will bring some of the finest street food vendors of the world in one sort of open air space… I'm working on a prequel to my comic book "Get Jiro" [about Jiro Ono of "Jiro Dreams of Sushi" fame]... That's about it for now.