READ THIS NEXT
How restaurant chains are duking it out to be the best in their categories
Credit: Eric Shin

Chef Roy Choi was recently featured in the 2010 Creativity 50, along with his partner Mark Manguera. Here's the full interview with the straight up, frequently foul-mouthed, but well-meaning co-founder of the roving and tweeting Korean taco phenomenon Kogi.

What inspired you to launch Kogi? Before you started the business, you had been working your way up the ranks in the restaurant world, so why did you decide to launch a taco truck? And why the Korean-Mexican combination?

Launching Kogi is not really a great way to describe it. The shit just happened. I lost my job, Mark [Manguera, Kogi co-founder] called me to just hang out as a friend cause that's how he is, then he rolled up on me with this crazy idea. I didn't know how to feel when he approached me; I was still in shock from leaving the kitchen. I had been cooking for 12 years straight, no holidays, on my feet six days a week for 14 hours a day, just runnin' shit. I was just a salary man who focused on making food delicious with no accolades or accomplishments. I was a hotel chef, plain and simple.

But I was good to people, I was passionate about food, I worked my ass off, and I am a living breathing child of the city of L.A., straight up. 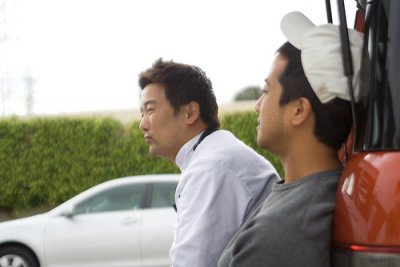 Kogi co-founders Choi and Manguera
Did you have any sense of how popular it would become? If so, why did you think it would catch on?

We never launched Kogi with the intention of being popular. We are Korean-Americans?if you don't know, our steez ain't that popular in the whole scheme of things. We are a suppressed, self guilt-ridden, messed up hair-wearing culture that always protects our awkwardness with nice clothes and some hair gel.

But we are some hard-working, humble mutherfuckers and we had some smart people on board. I think it caught on because we honestly reached out to people, we put ourselves out there in extraordinary circumstances (2 am in front of a club), and the food was fucking delicious. 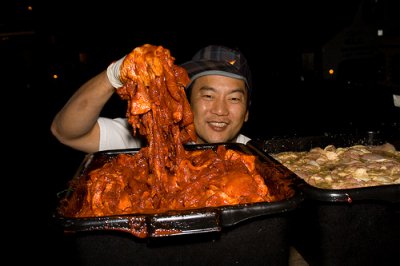 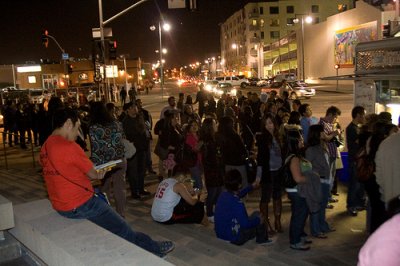 This is a short line.

What do you make of the current food truck craze that you helped to start? What about food culture, society in general do you think has helped to cultivate food trucks' popularity?

The current food truck craze is a complex one for me. When I started Kogi, I said to some people that I wanted no credit for any of this. I just hoped to kick the ball that others would play with. I also imagined visions of street food stands and hawker markets like in Asia and how that would replace fast food in America. I never imagined it would catch on like this so fast with every color of the rainbow.

I am happy for others who have started a venture in their lives, but I am a gypsy and loner by birth. I feel weird about being a part of a fraternity of food trucks; I feel more comfortable in dark alleys behind chain link fences under broken street lamps. But I hope the food gets better and that the street food scene continues to grow. I just hope that as people venture into it, they search the spirituality of the history of street food and don't do it for the fad. I think although America is a great creative country it is still very young in its eating culture. This is almost like Medieval times back in the old days of Europe. We're still gnawing meat off a bone and shit, we've got a lot of growth left in this whole street food world. 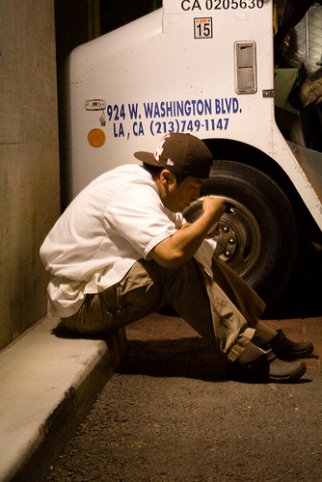 Chef Roy Choi takes a breather in a dark alley.

One of Kogi's innovations, aside from your food, is your use of Twitter. What inspired you to make Twitter part of your business plan?

Twitter was free, new, and an idea from Eric Shin, [Kogi co-founder Mark Manguera's wife] Caroline's little brother, our in-house photographer and Azul lunch truck manager, and Mike [Prasad], our former social media consultant. It seemed like a great way to communicate. But Kogi has been a weird spiritual ride and although it was not intended, Twitter paved the perfect way for Alice [Shin], creative director of Kogi, to develop her character and incite the world! 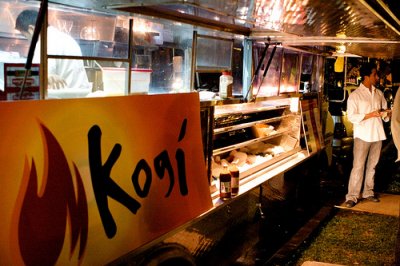 You have cited Emeril Lagasse as one of your inspirations. What was it about him that helped you move into cooking?

Emeril saved my life, real talk! Not in person, but in an out of body experience. I was a fuck up and dead beat when I hit 25. I smoked out everyday, I was drunk on weekends getting into fights, I gambled with some straight up Chinese gangsters, and my shit really stank.

When I hit rock bottom in my underwear, waking up in the afternoon to Essence of Emeril one day, he stepped out of the TV and grabbed my shoulder and said, "What the fuck are you doing? Taste this, smell this, eat this, nourish yourself, get your ass up and stop being such a punk."

I woke my ass up on that day, picked up a knife and instead of killing myself, I wiped the snot from my eyes and it's been ON ever since! 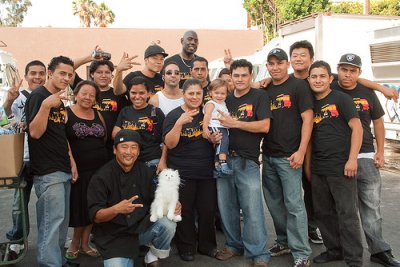 The peeps of Kogi.

Who else have you been inspired by and why?

Recently, I am inspired by my staff and family and Kogi managers, straight up. They are young, courageous, creative, and inspiring.

You're launching a new bricks and mortar rice bowl restaurant soon. What are you hoping to achieve with this? What else can we expect from Kogi in the long term?

The restaurant has no high hopes. Only low-brow dreams. We want to cook peasant food. The rice bowl is a sacred thing to us Asians. It is what every Asian kid grows up on. That shit is for reals! We just want to create a place where we would eat, but put our flava on it.

It's like taking your first car from your parents at 16 and putting stickers on it and tinting the windows. The delicious, loud, non-English speaking hole in the wall is our parents' car and our new place is the tinted window. Get me? 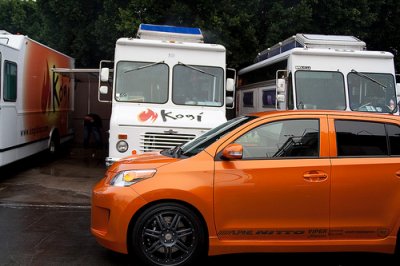 Kogi's fleet, including the souped up Scion xD with tinted windows.

What are your thoughts on taking risks?

I am a compulsive, ball-grabbing, shit-talking, bare knuckle motherfucker. I take too many risks, but I ain't dead yet.

I am also a family man who tucks his daughter into bed every night and cares deeply about each and every one of my team members and their families and about the residents of L.A. and O.C. So, you tell me.

To you, what is creativity?

What's you favorite item on the Kogi menu?

I love all our food for different reasons. They are all my children. But that short rib taco on a good day, oh man! But don't tell spicy pork, chicken or tofu that, OK? 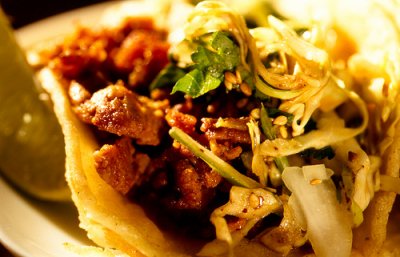 What's your favorite food in general?