Founders, Adam & Eve/DDB London
READ THIS NEXT
How restaurant chains are duking it out to be the best in their categories 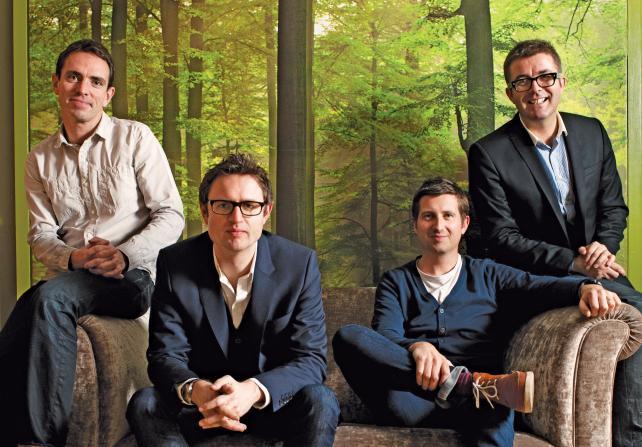 Being named Agency of the Year at the 2014 Cannes Lions festival doesn't automatically qualify you for the Creativity 50, but Adam & Eve founders Ben Priest, David Golding, Jon Forsyth, and James Murphy did much more than win awards this year -- they transformed DDB's sleepy London office into a shop firing on all creative cylinders.

Ben Priest is a creative leader whose light touch permeates the agency's output, which raked in 22 Cannes Lions this year, including an extraordinary four Grand Prix for Harvey Nichols' "Sorry I Spent it on Myself" holiday campaign.

The agency's work for John Lewis, Unilever's Marmite, Volkswagen, Google and Diageo was also part of the Cannes success story. And yet another crop of outstanding Christmas ads rounded off an exceptional 2014 for Adam & Eve/DDB London, which included some big international wins. Mr. Priest isn't intimidated by the challenge of keeping up standards, though. "We just have to have the best people in the building and to keep our open, collaborative way of working," he said.

What kind of creative director are you?

Mr. Priest: I'm hands-on, but I suffer from a short concentration span, so I dip in and out very intensely. When we started, all our teams were juniors so I helped them deliver everything, but I stopped that quite early on. Now we have a lot of senior talented people, so I can't make all the decisions: I need to be out seeing clients and running the company. I play the creative director role, like a football manager or a chef -- tasting dishes, adding a bit of this and that and making sure it doesn't get burnt. I still look at lots of things and see that they wouldn't be the same without me; I've added a joke or an endline or a structural suggestion.

How easy is it to stay creative now that you are part of such a big agency?

Mr. Priest: I thought about it but it's worked out. It's easy. You just have to get the best people in the building -- not just creative but account people and planners too -- and then nobody sits around thinking, "Let's have a safe year."

How did you celebrate winning Agency of the Year at Cannes?

Mr. Priest: We walked out of the Palais holding all these shining awards and we were interviewed by TV crews. When we finally got through, we went into the first bar we found, sat at a table and put all the trophies in the middle of us. We got some drinks and we sat and stared, thinking, "Did we just do that?" It's a pretty crazy thing to happen to an agency that was only set up in 2008. After an hour of processing it, and texting our mums, brothers, girlfriends, etc, we realized, "We did it!" and decided to go out and strut. We stayed out all night and had a great time.

The agency is very British, but its creative style crosses borders. How does that happen?

Mr. Priest: We have a British sense of humor, but that travels. We're seen as very British because of John Lewis and Harvey Nichols, but we do lots of global work for Google, VW and Unilever. The world is so identical now, and people recognize good ideas – I hope it's because we produce good ideas.

What was it like working with David Beckham for the Haig Club whisky launch?

Mr. Priest: It was a brilliant process. It was lovely to play with David in a grown-up role. David was involved in the project long before we came along, and he's not just a face – he's very involved in the business and he knows exactly where he is and where he wants to go. He has a point of view, and is very clear about what feels right for him and what doesn't. It wasn't just David – he's close friends with (director) Guy Ritchie and it was different for us to work with a movie director, which is important because it shakes things up.

How will you keep up the creative standards in 2015?

Mr. Priest: To quote my old boss, Jim Kelly, "It's a high-class problem." But it's what we all want to do. We've got to work in the same way we always work -- to keep our open collaborative way of working – and to get new people in. We need to keep winning new business to create new opportunities. As for global agency of the year at Cannes, I don't know if people get that two years in a row, but we'll keep doing all the same things as we did last year.

Were you nervous about creating the follow-up to "Sorry, I Spent it on Myself" this year? Were you surprised by its success?

Mr. Priest: Nervous? No. That's what we do. It's only advertising. We have a great client and a great creative department. Of course some people aren't going to like "Could I be Any Clearer?" as much as "Sorry I Spent it on Myself," but that's not going to stop us doing it. We were at a DDB global creative director gathering in Miami this time last year -- where the audience is quite representative of the Cannes jury in that it's very global -- and the reaction [to the Harvey Nichols campaign] was staggering. We were blown away. I remember them saying, "You're going to win everything you enter that for." We thought we'd done a good job but that was the moment it caught fire.