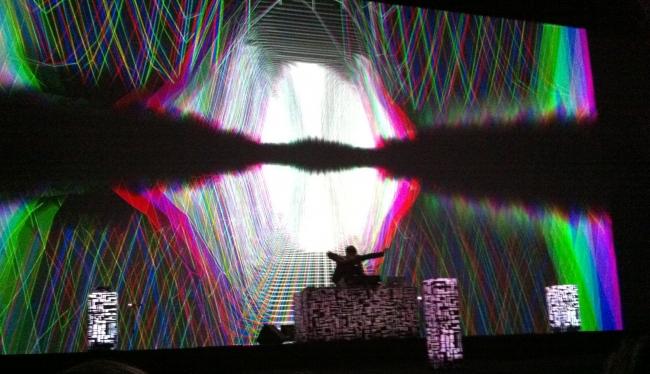 The opener was a fitting prelude to another eclectic mix of spots, short films, music video and virals from 17 directors. According to Saatchi Worldwide Digital Ccreative Director Tom Eslinger, the agency sifted not just through reels but also cast out more nets to find work through social media, blogs and virals.

Among the audience favorites include Andreas Roth's Exorcist homage for Dirt Devil; an '80s-style bromance by The General Assembly; and a design-minded take on domestic items turned sex machines by Lernert and Sander. The show also featured a host of animation and multimedia works, including The Daniels' Dogboarding clip; Jonathan Higgs' super-effected "Photoshop Handsome" video for Everything Everything; a world seen from the tushies' point of view by Tomi D @ Punga; a creepy, hyperdetailed look at a spider attacking its prey by Passion Pictures' Polynoid; and a poignant contemplation of the passage of time by Agile Films' Mikey Please.

As part of this year's showcase, Saatchi partnered with Vimeo and Moby on the "Hello, Future" Music Video Challenges. Announced earlier this year, the agency invited directors to interpret the show's theme of "Hello, Future" in a music video scored to one of three tracks from Moby's new album, "Destroyed." The winner was Mexican director Alberto Gomez, who earned a chance to work on a project at one of the key offices in the Saatchi global network.

Check out the full list of winners below. All the films will also appear on the Saatchi New Directors YouTube channel.

Tell No One: Seaweed

The General Assembly: Grum- Through the Night