READ THIS NEXT
Burger King's Moldy Whopper and Go Back to Africa win Black Pencils at D&AD
Joel Rodriguez
Credit:

Last week 180, Los Angeles announced the hiring of Joel Rodriguez as creative director for the Adidas account. Rodriguez' most recent post was at Goodby, Silverstein & Partners as a creative director and art director for clients like Sprint, HP, Comcast and Hyundai. This is his sixth agency since 2000, with stops including BBDO, New York, TBWA/Chiat/Day, New York, and Fallon, Minneapolis.

We spoke with Rodriguez and 180 L.A. executive creative director William Gelner about the move. 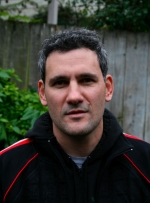 Joel Rodriguez
Rodriguez: A lot of things, actually. Certainly the first thing was when I heard William was out here and, though I had never met him, have always loved his work. I knew he was keen on doing work outside the norm, taking advantage of all the mediums at our disposal. That, combined with the notion of coming to a smaller agency and helping it build was really exciting to me.
I've worked at some very respected places, but they were also larger and as with any big place it's a bit more difficult to carry a vision through to the end. The fact that this place is so lean was a big factor. I've worked for smaller shops before and it allows you to be a more integral part of the process and the work.

William, what brought Joel to your attention and makes him a good fit for 180 and the creative for Adidas?
Gelner: Well first, Joel is incredibly handsome. After that, the thing that made us excited about him was his well-known TV work, ranging from the comedic to the cool. That was attractive to us because as an upstart, obviously we need great ideas and people who can work in a non-traditional way, but we also need people who can craft. Joel brings that. He's proven that he has the ability to finesse and execute, which is equally important as the idea. You can't just have good ideas that look like crap or fall flat. He's got a great design background, he's a great art director and proved in various channels that he can craft. He's also been challenging himself and coming up with some really interesting non-traditional stuff, particularly some of his digital work for (Goodby, Silverstein & Partners). Not only can he think in the new media world, but he also brings this phenomenal track record of crafting in every medium.

Joel, you're coming from an impressive run of work at a variety of creative shops. What lessons from those experiences will translate to 180 and, specifically, an athletic apparel brand?
Rodriguez: I think if I look back at my career, many of my creative directors have been writers so I've always played the role of asking, What is it going to look like? At Goodby, there's so many great designers and just great minds, which is a good thing but I think it's also good for some work to come from a singular point of view and focus. It's a simpler process, as opposed to having to go through so many people, however talented they are.
In terms of working on a sports brand, basketball's always been a sport I loved. I play and watch the NBA, as well as other sports like biking and golfing. The type of work and clients that 180 has and does is definitely different from a lot of the stuff I've done in past, in terms of comedy. I always thought the comedic sense wasn't second nature to me. I've always been more interested in a more visceral, visual sense.