We believe the best work in this category can often be the most powerful. A single image, well thought-out, can speak louder and resonate more deeply than some multi-platform monsters or massive film productions, as you'll see within our picks for best print/out of home/design of 2013.

Also, check out our picks for 2013's Best in TV/Video and 2013's Best of Integrated/Interactive.

Go to Scotland. There you will find Shetland ponies -- in adorable woolly cardigans. There isn't much else to say about this winning campaign from Visit Scotland, to celebrate 2013's "Year of Natural Scotland," that invites you to explore the country's natural beauty. And ponies.

Some of the best work this year was from brands that listened to their consumers, closely. The best example of this perhaps was McDonald's Australia.

In Australia, McDonald's is often called "Macca's," a quirky nickname that the fast feeder has submitted to the Macquarie Dictionary for consideration in the next edition. The company embraced the nomenclature to celebrate its 40 years Down Under and Australia Day, which fell on Jan. 26 this year, by changing the name of 13 of its restaurants, an effort that comes in at No. 9 in the print and design category. 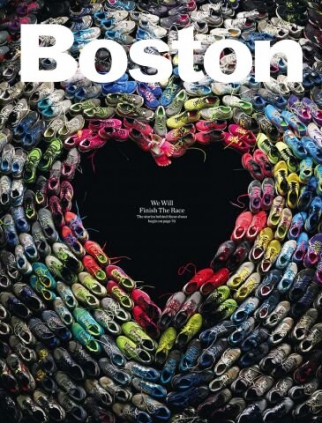 Creativity can manifest itself anywhere -- even in the aftermath of a tragedy. While many paid tribute to the lives lost and people injured in 2013's Boston Marathon terror attacks, we think the city's own Boston Magazine did it best, with this uplifting, evocative cover featuring a heart created from the shoes of the marathon runners. Liz Noftle, deputy art director at the magazine, said the team wanted to "do something really special." They also had to work quickly, with only a few days between the bombings and the deadline to ship the issue. The mag staff reached out to "anyone and everyone" to collect shoes, collecting some themselves and organizing couriers to bring in others. Boston's photo editor, Scott Lacey, shot each shoe individually for the site and the inside story, then drove them down to New York, where photographer Mitchell Feinberg shot them. "We closed the magazine while the city was in lockdown on Friday," she said. The cover is No. 8 in our print and design category this year.

No. 7: Givadaun: Smell a Memory 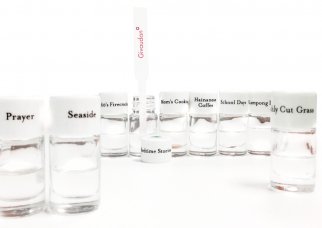 Some of the best work this year came from marketers that sought to do good, while also pushing product. A good example of this is fragrance house Givadaun, which used their scents to evoke emotional memories for patients suffering from dementia and Alzheimer's. "Smell a Memory," which comes in at No. 7 in the print and design category, is a project by JWT Singapore that create bespoke kits personalized for individual patients, using their family history, ethnicity, age and personal stories. The brand's perfumers have bottled smells like "Bedtime Stories," "Prayer," and have used ingredients relevant to Singapore, with herbs and spices from Hainanese coffee, local dishes, as well as incense used in local temples. The team tested the power of the scent in two trials at care facilities in Singapore, and found that the kits proved to be tools in sparking memories among those with dementia and Alzheimer's, helping them re-engage with the world they live in, and their families and friends. Givaudan now plans to extend the project to other regions as part of its sustainability program, and continue trials in Singapore.

BMW-owned Mini celebrated its customers with an outdoor campaign by Iris, which comes in at No. 6 in the print and design category. As they passed digital screens along one of London's main roads, Mini drivers found simple, fun content aimed directly at themselves. Messages such as "Hey cream Mini, what's your secret?" and "Hello blue Mini driver," flashed up on giant screens, thanks to software that recognizes the Minis as they drive by, along with a team of "spotters" who had to pass a test to prove they could see and name a make of a MINI from 50 paces.

Ikea goods aren't exactly the sturdiest known to man, but the retailer recently set up a platform through which its customers could find a new home for the Besta, Hemnes, Malm or other pieces they're ready to part ways with. Working with SMFB, Oslo, which is known for its unusual campaigns for the client (like one that engaged customers to help the brand when it was moving a store and let shoppers choose the type of ad they wanted to see via a web banner), the retailer launched "The Second Hand Campaign," an integrated effort that advertised customers' used Ikea products through outdoor, print and TV banners.

The agency and Ikea put a call out to its patrons, asking them if they could help them sell their used goods. Many people responded and 50 were chosen for the campaign. Ikea gathered their used pieces and produced real ads using those goods. Alongside pictures of the second-hand items were printed the owners' actual phone numbers for potential buyers to call. Outside of the ads, Ikea's Facebook page became a digital flea market where sellers and buyers could do business every Sunday.
The effort ran for eight weeks, resulting in the sale of every used product.

No. 4: British Airways Look Up Billboards

Talk about a cool billboard. Ogilvy U.K.'s new ads in Piccadilly Circus and Chiswick in the U.K. feature little tykes that get up, and point at planes as they fly by in the sky overhead -- but only if they're British Airways planes. They even feature the flight number, and where it's coming from, or going to. Smart way to get across information on all the destinations the airline flies to.

And now, for something a little bit different. MayoPublicidad DraftFCB promoted Peru's University of Engineering and Technology engineering program with a billboard placed in the desert that turns humid air into potable water, in an effort to show the real world difference smart thinking makes. This comes in at No. 3 in our print and design category.

In a statement, Ogilvy Art Director Christopher Hunt said: "When we came across these searches, we were shocked by how negative they were and decided we had to do something with them." UN Women is now asking Twitter users to debate the campaign using the hashtag #womenshould.

The simplest ideas can sometimes be the most powerful, and IBM and Ogilvy Paris prove that with "Smarter Cities," which turned ads into useful, smart solutions. By adding a simple curve to a poster, they turned them into places to stand under when it rains, and someplace to sit when you're tired. With some modifications, they also turned them into a ramp for bicyclists to easily traverse. The idea earned the brand the Outdoor Grand Prix at the Cannes Lions International Festival of Creativity.