How About a Tea-Powered Mini or an Iron for Your Undies?
READ THIS NEXT
'I won't direct alcohol ads': Simon Pegg on his new career move

It's April 1, and you know what that means. Marketer and agency pranks. Or attempts at something resembling a prank.

This year, we've heard everything from "branded aromatic rain" to "rotating buildings" to a nauseating cheese-scented fragrance.

We've gathered a few here. If you know of any other brands getting in on the April Fool's action, do share with us via the comment section below.

The agency takes the city's rainy weather and announces "Brand Drops," a "biotechnological marketing" tool that injects customized scents into droplets of rain for brands to differentiate themselves and allow for a "multisensory brand experience." According to a press release, it "drops" on April 1. The promo spot features a "scientist" and Brand Drops' very own "CEO," uttering all kinds of fancy scientific lingo.

On March 26, Cheetos released what looks like a faux Calvin Klein commercial for the launch of its "inaugural fragrance," which of course is inspired by the popular snack. Dubbed "Cheeteau," the scent has a blend of "buttery notes, accents of sharp cheddar and a touch of lemon for balance," according to the company. We received the "fragrance" via air mail yesterday and can attest to its cheesy grossness. The brand has gone all out with the stunt and will host a sampling of "Cheeteau" today from 12 p.m. – 5 p.m. on Madison Avenue in New York City.

Last year, American Eagle set up a prank with its "Skinny Skinny Jeans," which were "jeans" that were spray-painted onto your legs. This year, it looks like the apparel company is at it again with a similar stunt aimed at canines. On March 24, AE released what the company is calling a "Dogumentary," a video made for its new clothing line dedicated to dogs and adorably dubbed "American Beagle Outfitters." This time, it seems the brand has partnered with non-profit ASPCA, and claims it will donate $1 to the organization for every order. We tried "purchasing" an e-gift card via the website and got right up to the payment information section. The company told us yesterday that the donation itself is not a
hoax.

A "custom-engineered" packaging of the mints will eliminate the "shaking" sound so that consumers won't have to share. The gag was announced today via the brand's Facebook page.

The online grocer today announced the so-called launch of its Eagle-Caught Alaskan Salmon. Touting it as "the newest, freshest product," the company told us the prank would be featured on the company website, social media sites including Facebook, Instagram and Twitter and sent via email early this morning.

Fruit of the Loom: "Undie Iron"

Playing on its #StartHappy campaign that launched last year, the underwear brand today introduced the "world's first-ever Undie Iron." According to the company, the finger-operated, USB-powered device will go on sale April 1, and "will hit store shelves in 2022."

Yesterday, we received a "news alert" from the British conglomerate introducing "Virgin Buildings," an "ultra-green" initiative for a new generation of skyscrapers that, for whatever reason, are shaped like space ships or planes or kite-boards or balloons, depending on the city. The spot features a medical engineer and the big boss Richard Branson, who doesn't look so confident describing the buildings' design aesthetics. 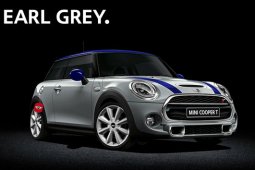 The auto brand "unveiled" a vehicle inspired by the nation's favorite teas, and powered by a "tea-leaf biofuel composite." The new "model" comes in a variety of colors including "Chamomile Yellow," "Red Bush" and "Earl Grey," and is capable of covering up to "40 miles on a single cup."