Phoebe was a veteran of the ad industry, having spent time at agencies including TBWA/Chiat/Day L.A., Y&R, Mother New York and Deutsch N.Y. She also appeared in advertising for brands like Nissan and Milwaukee's Best. According to Greg DiNoto, chief creative officer at Deutsch N.Y., she "never met an ad she wasn't afraid to take a piss all over."

She even was an enthusiastic source of inspiration for many of the ad world's most lauded creatives. "She was definitely opinionated and particular, but I think everyone respected her for that," said Rob Baird, creative director at Mother. "If she liked something you were doing, you knew you cracked it." Phoebe "made work feel like home," said Alain Sylvain, strategy at Silvain Labs. 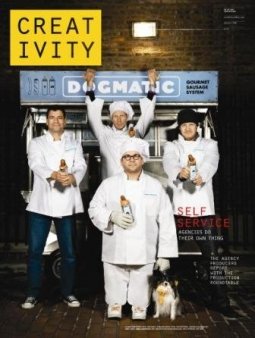 Phoebe's appearance on a 2008 cover of Creativity

Phoebe also appeared on the cover of Creativity Magazine in 2008, with her colleagues from Mother. She started at that agency as an intern, but within a year was promoted to "Action Team Squad Leader as well as head of Security," according to partner Paul Malmstrom.

Multi-talented, Phoebe was also a strong strategist, according to Allon Taraka, creative director at Mother, despite the fact that her immense talents -- "being fluffy and eating tiny bits of kibble" -- were wasted in advertising.

Deutsch will be hosting a fundraiser on Thursday, March 15, in honor of Phoebe and to help the ASPCA. Event details are below. If you would like to make a donation in memory of Phoebe, visit the ASPCA donation site.