An Eye for Art: The Ebeling Group and Graffiti Research Lab Take on a Cause | Ad Age
Skip to main content

An Eye for Art: The Ebeling Group and Graffiti Research Lab Take on a Cause

Much new digital technology has been deployed in the service of advertising, but a new project out of The Ebeling Group -- home to MK12, Lobo, Nakd, Bearfight and more -- has its sights set on a larger goal. 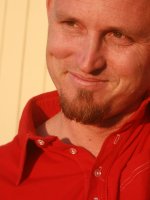 Mick Ebeling
Back in 2007, Mick Ebeling was invited to an art auction and fundraiser in Los Angeles. He didn't know the artist but came away from the experience with not just a new piece of art, but a newfound respect and appreciation for artist Tony Quan, a veteran L.A. graffiti writer called Tempt One. Quan has been living with ALS, or Lou Gehrig's Disease, for the past six years in which time the disease has rendered him a quadriplegic.

Two weeks ago, in collaboration with the Graffiti Research Lab, Ebeling helped Quan write his first piece of graffiti in six years, using ocular-recognition technology and lasers. We spoke to Ebeling, as he took a break from D&AD judging, about how this project began, what his overall goals for it are and more.

When did you make the connection between Tony Quan and the work the Graffiti Research Lab has been doing?
A couple months (after the art auction) I was speaking at a design conference and met the guys at the Graffiti Research Lab. After I had gone home I was talking with my wife about the experience and we just started talking about the idea that if these guys are able to write graffiti on buildings using a laser and a pointer, and we know that people like Stephen Hawking and Christopher Reeves were able to create communication devices using lasers and ocular recognition, then why don't we make it so Tempt can make graffiti with his eyes?

So I called the GRL guys up and from there it just started to unfold. It was just one of those things, every time we took a step, the right person or situation would appear and things just worked out. A few weeks ago, we flew all the guys out to stay at our house and in 10 days we were able to crack the code on a beta version of this device we want to build. Then we were able to create an application that will work with a device Tony already has. So we have two different things he can utilize.

It's amazing, the last night every one was there, we set up a projector outside his hospital and wirelessly beamed his screen to the projector and he basically did graffiti on the wall outside the hospital for the first time in six years. It was awesome, really a great experience. 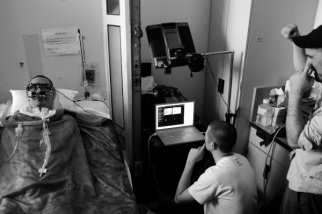 Tony Quan (left) tests things out.
What were some of the biggest technical challenges in getting it off the ground?
At first we had the camera that was attached to the glasses aimed right at your eye. What we realized is that you can't draw with your eye if something's right in front of you, you have to actually be able to look at something and use your peripheral vision. So in later models, we lowered the camera so it was shooting up at the eye, so it was tracking your pupil. As long as you calibrate the quadrants of your screen, you're still looking at the same tracking points. But, what happened in later versions, when you have something that's registering up you need to recalibrate for that as well as for the curvature of the eye surface itself. We're still trying to tweak how to calibrate the lens when it's shooting up at your eye and how that translates into getting an accurate representation of the movements of the eye. It was a lot fun to work on and cool to crack that code.

Tony Quan
Credit:
The Ebeling Group, Graffiti Research Lab
What would your ultimate goal be for this project and technology?
We have a few goals. The over-arching goal is to create a piece of free software and hardware that anyone with any neuromuscular disease can download and start using it, fairly plug-and-play. The reality of ALS is that once it takes over your body, you only have control of your ocular muscles, which are not connected to your spinal cord. But it's a gradual atrophy and you eventually die. So there's not a long life-span, so any help we can give someone to communicate better with what little time they have, is great. It started as trying to make something to help one person draw but keeps getting bigger and bigger. We've made it so Tony can draw again, which was a great accomplishment. He said in his email to us that he felt as though he had been held under water for six years and someone finally lifted him out so he could catch his breath. How many people like that are out there who need help to communicate?

We want to help others have the ability to draw and write and hopefully, go online and control it like a mouse, and we want to do it at a super low price point. We're looking into starting a foundation that can properly harness all the energy and time people want to put into this, so we can continue to develop things in a more formal way. We'd like to get student programmers in to work on it and get course credit and things like that. So we're looking into getting some grants so the work can continue.

What we created should've been created a long time ago. We didn't invent anything. Everything is off the shelf, it's just a matter of connecting the dots for this purpose. It's really given us a lot of motivation to keep going.

Follow the team's progress and watch video demonstrations of the project's development here.