Richard Bullock, ECD at 180 Amsterdam, will leave that shop after seven years to pursue a career in directing. He will be represented globally through production company Hungry Man.

"The filmmaking aspect of my work has always been my first love," said Bullock in a statement. "I have wanted to direct now for some time, but circumstances limited my ability to make the leap. Fortunately my role afforded me the opportunity to direct from within 180 and I was able to shoot some fantastic projects, particularly exploring longer form content. I had this feeling that the moving image component of what we do would explode with expanding bandwidth online and at this stage it still seems we are only scratching the surface." 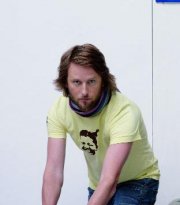 Bullock joined 180 Amsterdam in 2002 to work on the adidas account. He was partnered with Andy Fackrell. His credits there include the "Kicking it" spot that paired David Beckham and rugby star Jonny Wilkinson and the "Impossible is Nothing" campaign, among many others.

Prior to joining 180, Bullock was a writer at Cliff Freeman & Partners in New York and had previously been at Lowe Howard Spink in London, TBWA HuntLascaris in South Africa and Chiat Day Mojo, Sydney.

Bullock says he spent part of this year producing and directing a feature documentary project for an Australian charity called Operation Open Heart. He also says he is underway on commercial projects, with a short film and commercial for Oxfam, and a film for for Mother London for Comic Relief.