Social media one-upmanship continued in the digital community this morning when Agency.com's digital effort for Snickers.com, which encourages candy fans to "learn to speak Snacklish," prompted an immediate brandjack from a crosstown rival led by a former Agency.com creative.

Snckrz.com is a bare page done up in Snickers brown, with room for a user to turn text into a Snickers logo as well as a feed of a Twitter search for "snckrz," an element similar to Masterfoods' recent Skittles homepage redesign, also fashioned by Agency.com.

But snckrz.com wasn't a Masterfoods-led project, and isn't affiliated with the brand officially. 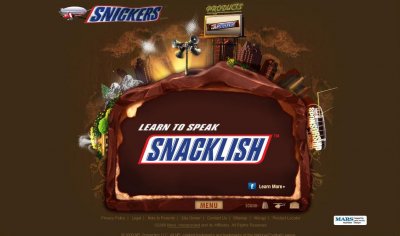 Agency.com's original Snickers site
While initially intended to be produced anonymously, the snckrz.com site was revealed to be the work of Poke, New York. Sources inside the agency confirmed their involvement and say they were inspired in good faith to add a bit of utility to Snickers' offering with the logo generator. 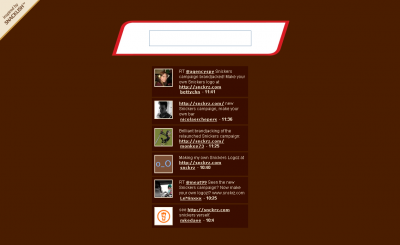 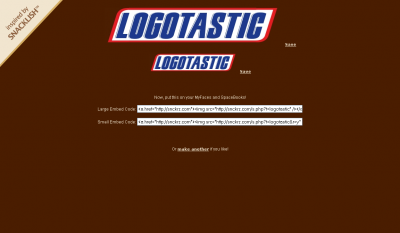 The quick-like-a-bunny add-on is very keeping with Poke's persona; both the London and New York Poke offices frequently emit single-serving sites (you know, little things like Umbrella Today). Just last week, in response to the Facebook random album cover meme, the London office put together a little tool to make it spread easier.

According to a spokesperson at Agency.com, the logo-creation element of Snckrz is a concept Poke co-founder and CD Tom Ajello developed (but wasn't realized) while working as ECD on the brand at Agency.com two years ago, around the time the first round of funny Snickers phrases as logos debuted.

Ajello says he didn't work on Snickers at his former shop. However, he has experience with the brand, winning an award for design on Snickers.com in 2001 for Modem Media.

Ajello, who left Agency.com in March of 2007 to become a founding partner at Poke, is one of several who made the Agency.com-to-Poke move. A digital affiliate of agency Mother, originating in London, Poke New York has done work including a site K-Y with Mother's New York office.

While the incident does raise the simple question as to why something as intuitive as a logo generator wouldn't be included in the official Snickers campaign based around funny phrases rendered in the brand's type, it also points to the bigger discussion of Flash microsites versus nimble sites built around CGM and social utility (especially in light of the fact that Skittles, another Masterfoods candy brand, launched such a CGM/social utility-dependent site within a week of Snickers).

The pretty-but-obtuse legitimate Snickers site launched Monday along with out of home and print work, laying the groundwork for TV spots to come.

It's unclear whether the Skittles effort will be ultimately regarded as a success or failure. The site initially raised eyebrows for being such an obvious lift of the floating-nav-over-social-media device from Modernista's homepage redesign. Additionally, the Twitter search has already been replaced as the default CGM source on the homepage by the brand's Facebook page after drawing the expected human-with-an-internet-audience behavior, profanity and evangelical messages, though is still available under "Chatter." Despite this, though, Skittles seems to be earning kudos for simply attempting a social-media led site.

What's most surprising about Skittles is its failure to leverage the brand's rich trade in web video views; indeed, both it and Snickers have struggled to bring their digital offerings to their traditional standard. Somewhere, the Little Lad sighs.