READ THIS NEXT
What makes an ad iconic?
Delete, by Ji Lee.
Credit:

To clear space for public communication and highlight what's believed to be the illegal use of public space in New York City, a local activist group whitewashed over more than 12o billboards and replaced the ads with art.

To spotlight allegations that media company NPA Outdoor doesn't hold the proper city licenses for a number of street-level billboards in lower Manhattan, Jordan Seiler of the Public Ad Campaign organized the New York Street Advertising Takeover to reclaim those spaces. On April 25, armed with maps Seiler created to point out the allegedly illegal billboards, 13 groups of two went out to whitewash boards between Canal and 30th streets. Later, more than 40 artists followed to produce art work on the newly ordained public canvases. One such artist, Ji Lee, formerly of Droga5 and currently creative director at Google Creative Lab, created the "Delete" poster above (the outdoor project is not affiliated with either company, obviously).

Two whitewashers, one artist, and one videographer were arrested during the event.

"I don't think anybody is trying to suggest we replace advertising with art work, but that we understand that advertising is a preventative factor for visual communication in our public environment," Seiler says. "If I have something to say as a concerned individual and that needs to written on the wall in some way so that the world knows about it, advertising often prevents that from happening."

Seiler says the idea for the project sprang from his ongoing work with Public Ad Campaign, recent interactions with mashup artist PosterBoy and a personal investigation into the legalities of billboards.

Find photos of NYSAT art work, below, and more on Flickr. 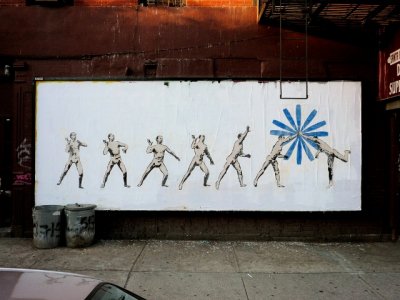 Muybridge High Five by I Am. 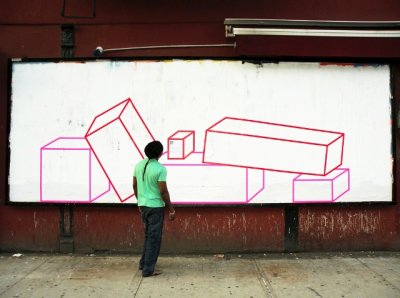 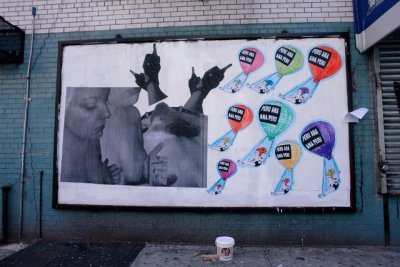