Now Through New Year's, Creativity Is Counting Down the Best Work of the Year

Creativity continues its countdown of 2013's best moves in brand creativity across film and TV, print and design and interactive and integrated campaigns. See our picks for No. 10 in each category here. Our No. 9 picks are here. Today it's time for No. 8.

Creativity can manifest itself anywhere -- even in the aftermath of a tragedy. While many paid tribute to the lives lost and people injured in 2013's Boston Marathon terror attacks, we think the city's own Boston Magazine did it best, with this uplifting, evocative cover featuring a heart created from the shoes of the marathon runners. Liz Noftle, deputy art director at the magazine, said the team wanted to "do something really special." They also had to work quickly, with only a few days between the bombings and the deadline to ship the issue. The mag staff reached out to "anyone and everyone" to collect shoes, collecting some themselves and organizing couriers to bring in others. Boston's photo editor, Scott Lacey, shot each shoe individually for the site and the inside story, then drove them down to New York, where photographer Mitchell Feinberg shot them. "We closed the magazine while the city was in lockdown on Friday," she said. The cover is No. 8 in our print and design category this year.

And on the theme of emotion, coming in at No. 8 in the film category is one of this year's best tear jerkers, a commercial returning the popular Clydesdales to the Super Bowl, via Anomaly and RSA director Jake Scott. The ad tells the story of a Clydesdale owner and his horse that, combined with the Stevie Nicks soundtrack, is sure to make you reach for tissues. The brewer supported the ad with a Twitter promotion that asked fans to name the baby Clydesdale featured in the spot.

Moving from emotion to adventure, the No. 8 spot for interactive/integrated work this year belongs to Heineken. The brand has been playing around with its "Open Your World" tagline a lot this year, daring customers to go beyond their comfort zones. But its best execution perhaps was "Departure Roulette," an extension of its "Dropped" campaign that dropped people off in strange locales and got them to find their way home. "Departure Roulette," from Heineken and Wieden & Kennedy New York, let travelers coming into Terminal 8 at John F. Kennedy International Airport change their destination to somewhere unexpected. The only condition was that they had to go right then and there. 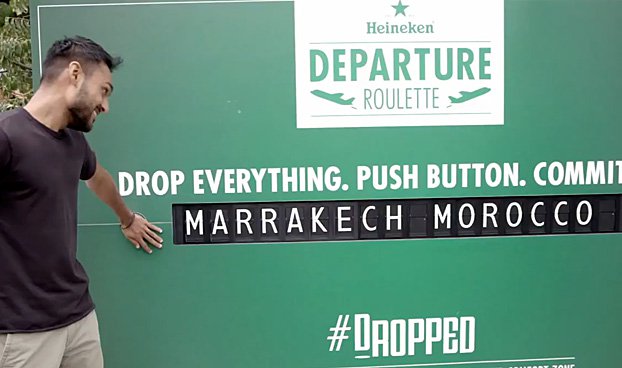