McDonald's in China has teamed up with Rovio for an Angry Birds-themed location-based game which gives customers of the fast food chain special games while they're in the restaurants.

TBWA/Shanghai and TBWA/Gamelab (which is based in Helsinki and has a relationship with Rovio) developed the campaign, which gives special hidden game modes and free Power-Ups to McDonald's customers who are playing Angry Birds on their iOS devices. A TV commercial, featuring a McDonald's burger that gets stolen from a customer by the pigs, setting the birds in motion, launches the campaign. 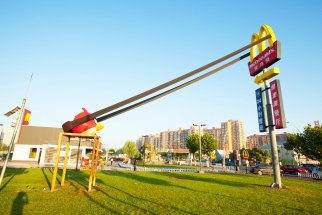 In addition to the spot and customized game, which features in-game advertising and is available on both mobile and desktop devices, the campaign also includes in-store promotions, online advertising, social and outdoor media. Consumers will also be given the opportunity to vote on a city that will get to build an actual "slingshot," outside its branch of McDonald's.

Rovio recently also announced a partnership with the Star Wars films. In November, the brand will debut a video game which will combine the Angry Birds with the plots of characters from the Star Wars saga. Red Bird will play Luke Skywalker. Check it out on Creativity -Online.com, and follow @creativitymag on Twitter for more great work.