Spoiler: Actual Humans Did Most of the Work
READ THIS NEXT
‘Not Funny!’ The industry remembers Cliff Freeman
Man vs. machine at McCann
Credit: Clorets

One of these commercials for Clorets mints is being billed as the first campaign from McCann Erickson Japan's new AI creative director. The other is the work of a human.

One is about a flying dog. The other features a barefoot calligrapher. Mondelez brand Clorets Mint Tab is asking the Japanese public to vote on which ad is more effective, without telling people which one is the product of artificial intelligence. There are no subtitles, but both ads are pretty straightforward.

McCann announced back in March that an "AI creative director" named AI-CD ß would be joining its staff, and that the project had been developed by McCann's millennial employees. Though the whole thing made for some attention-getting headlines, the fine print made it clear the cyborg creative is actually more of a data analysis program dressed up like R2-D2.

The team of millennials analyzed and tagged past TV commercials, including winners at Japan's All Japan Radio & Television Commercial Confederation's annual CM Festival. The AI creative was "designed to mine the Festival's database and creatively direct the optimal commercial for any given product or message," McCann said at the time.

As it turns out, the cyborg creative director makes its human minions do most of the grunt work. Mondelez asked a human and AI-CD ß to come up with a creative direction to explain the product's benefits: It freshens the mouth immediately with one tablet, and the freshness lasts for 10 minutes.

The human CD, Mitsuru Kuramoto, who is also a successful TV writer, proposed something completely straightforward: "convey a clear refreshing message." His AI counterpart came up with this brain-teaser: "convey 'wild' with a song in an urban tone, leaving an image of refreshment with a feeling of liberation." 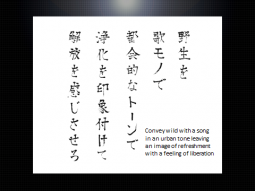 It probably sounds better in Japanese

Both of those instructions obviously left a lot of room for interpretation to the humans tasked with bringing the ads to life. The "clear refreshing" message evolved into the ad with the calligrapher, who spells out the brand benefits with a giant paintbrush and ink. The AI director's instructions for something "wild" led the creative team to the shaggy dog.

After Japanese consumers vote on their favorite, the winner will be announced in late August. Is there a bigger takeaway in all this – besides that robots are probably not the immediate future of the creative industry? If anything, it's that ad agencies in Japan are trying really, really hard to do fun stuff with robots. Dentsu was part of a team that sent a robot to the International Space Station, and it also created a humanoid robot modeled on a cross-dressing TV star called Matsuko Deluxe.