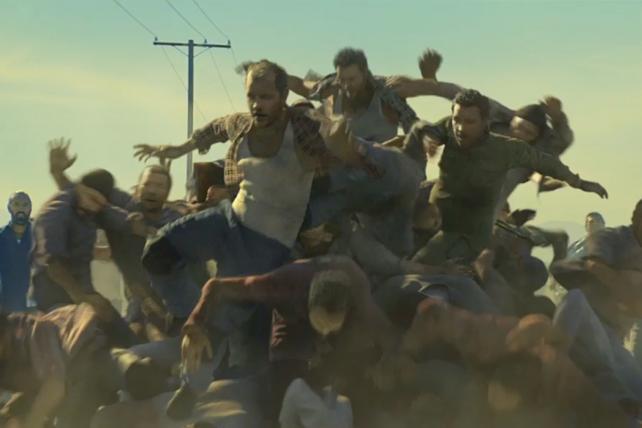 Billed as a "global interdisciplinary creative studio," Radical Media continued to live up to its mantra as "never established" with another year of impressive work that spanned a breadth of storytelling platforms.

Comedic powerhouse Steve Miller brought his signature laughs to more ads for Dos Equis' "The Most Interesting Man in the World," as well a GE spot featuring the teeny, tiny, smart-mouthed donkey who grants invention wishes. A chatty robot also delighted over bubble wrap, despite the fact his owner has sold him off on Ebay, in a laugh-out-loud ad he shot for Fedex and BBDO New York.

Sebastian Strasser imparted frighteningly good drama to Audi, in a stunning ad that almost felt like a scene from World War Z. It depicted mechanics as crazed, zombie-like fiends swarming after an Audi whose service light has just blinked on. But they're stropped in their tracks by the doors at an Audi garage -- the point being to promote the brand's service contracts.

On the outdoor front, Radical and Director Luc Schurgers directed the spectacular projection mapping stunt that saw Lionel Messi blazing through the real streets of Barcelona -- a production that got temporarily stopped by local police since it was filmed on real streets, not on a closed-off set.

For Nike and Wieden & Kennedy Tokyo, Director Ralf Schmerberg showed the fun side of sports for Korean kids, in an action-packed spot featuring everything from ping pong to snorkeling to gymnastics.

The shop proved powerful on the socially-minded front too. Timothy Saccenti stirred audiences directing Idris Elba as a soccer coach schooling kids on how to eviscerate Ebola for Africa United via M&C Saatchi London. Radical also produced a series of moving films for TBWA/Chiat/Day/L.A. and Conservation International. The Cannes Gold Lion-winning ads featured the voices of celebrities such as Harrison Ford, Julia Roberts, Robert Redford and Kevin Spacey, all taking on the persona of nature itself and expressing their concerns about how humans have been mistreating the environment.

In experiential the company continued to rock, literally, on its work for American Express "Unstaged," with events celebrating Tim McGraw, Pharrell and Taylor Swift, the latter which also included an app that allowed fans to experience Ms. Swift's "Blank Space" single as 360-degree interactive story.